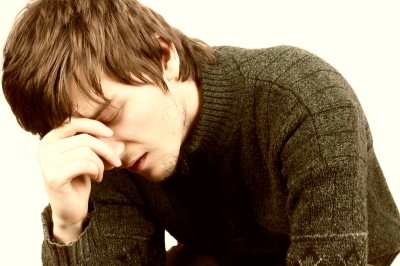 Your eyes are bloodshot and you’re acting like a zombie. Is everything all right?

You must not have slept much last night.

Here, sit down. Let’s have some coffee. Cream and sugar? I take mine black. I’ve developed a taste for it over the years. You should try it too. You get used to it and then it’s not so bad.

You’ve been burning a candle at both ends for a while, too—you don’t know exactly how long. One day fades into the next. Rundown, you can’t keep going this way. Something has got to give: your physical health or your mental health. It’s not a question of if but when.

It’s a cycle that repeats itself. You don’t rest enough. You then get yourself hopped up on energy drinks, caffeine, and other stimulants. You continue through your day and, the next night, don’t sleep enough again. Then you’ll do it again tomorrow. Your vague plan is to try to catch up on the weekend. That doesn’t work. It’s very hard to pay back a sleep debt.

You’ve got a lot on your mind too when you do lay down. The fight or flight hormones, epinephrine, and norepinephrine, course through your brain. These problems continue to fester. Among them, this lack of sleep.

When you make a schedule, think of a box you want to fill with different-sized rocks. Put them in one by one, largest first. It’s easier to fit more rocks in if you do it that way. Sleep should take a big chunk of time so it’s a pretty big rock. It should be a priority.

Make sure you’ve got enough time dedicated to sleep. It says that right on the instructions of the sleep medication, the one you’re thinking about asking your doctor for. You’ve seen a lot of ads, so why not? She or he’s not going to talk to you very long about that. There’s only a limited amount of time to get your visit done. Scheduling concerns, you know.

Some people still try to take the sleep medication while continuing to try to get a seven or eight-hour activity done in four or five hours. According to one survey, 20 percent of Americans said they get less than six hours of sleep a night.

With as much scientific progress as we’ve made as a society in the last hundred plus years, nobody knows why we spend so much of our time sleeping. They think it helps restore body tissues and assists in the growth process. Experiments show it’s necessary for functioning, but the exact reasons for the “how” still eludes us.

The Pareto Principle says 20 percent of your actions gives you 80 percent of your results. When you consider sleep should take between 1/4th to 1/3rd of your life, that’s a pretty big chunk. It’s important if only from a time perspective.

Deep down, you might feel like sleep isn’t important, that it’s a waste of time. That’s why you jam-pack your schedule. Keeping a dream journal is a way of making the time more valuable to you. Maybe that would be the way to encourage you to dedicate a realistic amount of time to it. Dream journaling could be a big part of the solution to changing your life and improve your health.

Lastly, be positive about relaxing about going to bed.

Give it a try!

This post includes an affiliate link for which we receive a commission.