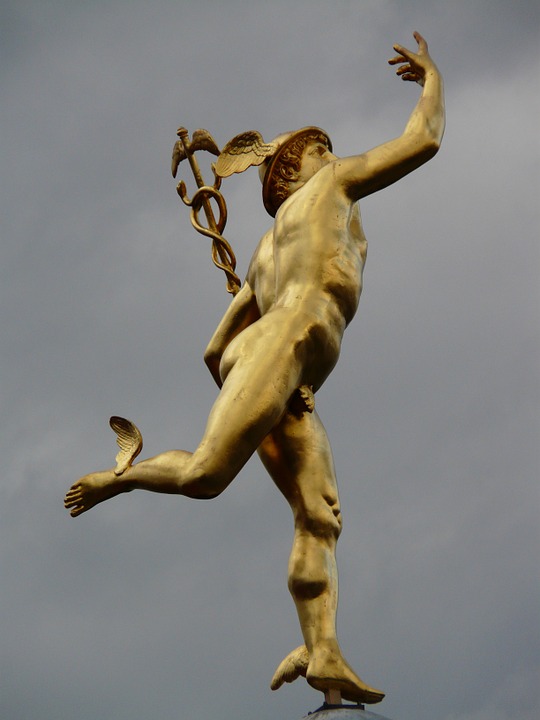 The “messenger” sat in the chair slumped over, breathing heavily, exhausted. Though his face was obscured, the way he was dressed reminded one of the Roman god Mercury, the deity of messengers.

“Do you know how hard it was to get through to you?” the man said between heaving gasps of air.

I shrugged. I didn’t. I had no idea and couldn’t even begin to guess.

“I did it, though. I did it. I got through,” the messenger said, proudly. He never said what the message was.

Sleep research reports the average sleeper dreams five to eight times per night. They know this because each time someone dreams, brainwaves spike in their EEG.

Most dream journalers wake up a time or two during the night. The journaler might get a few quick notes on one to three dreams. Not all dreams are recorded.

Even with the Dream Recovery System how many dreams will you miss? There’s no way to be sure. If you don’t go to sleep with an EEG machine attached to your head, you’re not going to know the number of dreams you’ve had. Most sleepers aren’t going to wake up after each dream. If they did, the interrupted sleep would be a problem.

Unless you wake up regularly during the night, you’re usually only going to catch that very last dream, or maybe one that happened in the middle of the night if you wake up with a start.

No wonder my subconscious chose to show the image of the messenger to me. It’s well aware that most of what it’s showing isn’t getting through to my conscious mind. That shows awareness of the process.

Twenty percent is better than nothing.

As the image with the messenger shows, the subconscious is aware of what you’re trying to do. Dream journaling is giving it a platform with which its musings and observations a chance to be heard.

The subconscious is you. It’s not something separate. It knows.

If it wants to make sure the conscious mind knows or realizes something, it’s going to wake you up or it’s going to save it for the last dream in the cycle.

Another strategy it might use is to emphasize a concept heavily, so heavily that you’re not very likely to miss it.

It’s as aware of what you’re doing as your conscious mind.

There’s absolutely nothing magic or separate about the subconscious. It’s you.

Are you missing something by not recovering all of those dreams?

It’s hard to tell if you don’t know what they are.

You could try to tell yourself to wake up after the conclusion of each dream. You could be successful more times than not, especially if you’re highly motivated.

However, you’re doing more than recovering dreams when you’re sleeping. Your body is repairing itself and building memories. Waking up repeatedly during the night isn’t desirable for those jobs.

Let your body do its thing. Let your conscious and subconscious do their things. It’s all important.

Trust your subconscious to show you the most important dreams for recovery.

If your sleep gets interrupted and you forget most of your dream, write down what you do remember.

Your time is best spent focusing on the fundamentals of dream recovery: keeping your dream journal handy; writing a few notes in it when you have a dream no matter what; wearing the band on the opposite wrist from the one you usually wear a watch.

Your subconscious usually has the ability to wake you up if it needs to. It could send you a dream about falling, backing a car up into a wall or something else. You don’t need to worry about missing something.