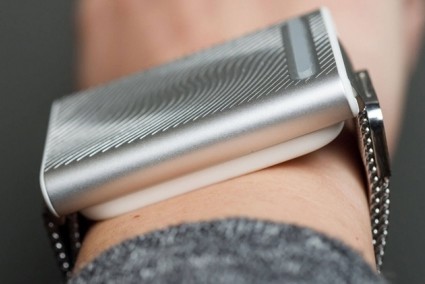 Sometimes emergency departments will get patients who are hypothermic.

A child will have fallen through ice into a pond during winter.

A man will have been found passed out laying on a cold garage floor for hours.

A woman will have been sitting in thin clothes better suited for a summer on a frigid night in January in a dwelling without heating.

Hypothermia happens when someone’s body loses heat faster than it can produce it.

Other times, emergency departments will have to treat patients whose body temperatures have gotten too high.

That’s a condition known as hyperthermia.

The Embr Wave, on display in March at the National Sleep Foundation’s Sleep Show in Houston, won’t do anything to help people who are either hyper- or hypothermic, says Sam Shames, chief operating officer, and co-founder of Embr Labs.

“Though it still will warm you up or cool you down pretty nicely,” he adds.

Hypo- and hyperthermia affect an individual’s core body temperature. Both of those conditions are relatively rare. Most of the time people just feel cold.

The Embr Wave works to change the individual’s perception of being either too hot or cold by sending cooling or heating waves via the neuroreceptors on the skin.

“It can prevent arguments at home and at the office,” Shames said.

The device affects thermoreceptors on the skin, Shames said. This allows the user to adjust their perception of temperature either up or down depending on their needs. The device is controlled by means of a smartphone app.

It was developed by scientists and engineers affiliated with the Massachusetts Institute of Technology.

It retails for $299 on the Embr Labs website. It carries a one-year warranty with a 30-day trial period.