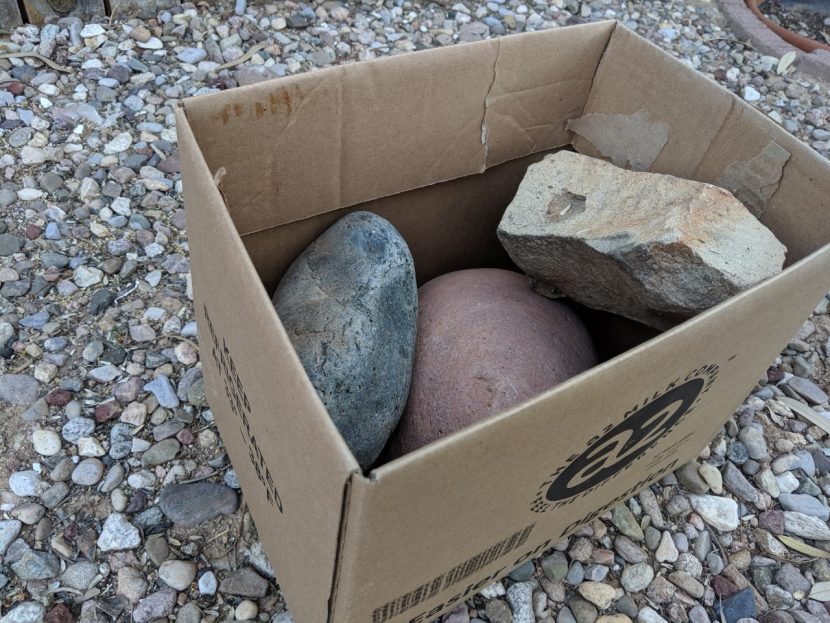 If he had kept every opposing player off the bases until the ninth inning, it would have been what’s known as a “perfect game.”

The seventh inning is about 3/4ths of the way through the game.

That’s a lot of time being perfect.

There have only been 23 perfect games in the history of major league baseball. When you think about the over 400,000 games that have been played since 1876, that’s a lot of games.

For many people, it’s a constant goal.

Winning is the big rock

After Washington Nationals player Trea Turner broke his bid for perfection, Greinke said he was glad. “It’d probably be more of a hassle than anything. . . a bunch of nonsense comes with it.”

The nonsense would be a distraction from what he says that he’s there to do: help the Arizona Diamondbacks win games.

So far in 2019 Greinke is 8-2. He’s winning a lot of games. If he tried to be perfect, he’d be distracted and then he wouldn’t win so many games.

Winning games is what’s important to his team, not keeping all runners off of base. Worrying about that is a distraction.

Nevertheless, the bonus shouldn’t come at the expense of winning.

People are conditioned by parents, teachers, coaches and relatives from an early age to want to get an “A” in everything we do.

We’re perfectionists. If we’re not, they try to make us that way. Perfection is always better than non-perfection, we come to believe.

If we don’t start out believing perfection is always better, parents, family members, schoolteachers, and “concerned adults” try to make us that way. They tell us to get serious.

Society sets “perfection” as the default desirable mode. Seeking perfection is equivalent to caring. It shouldn’t be. It’s not the same thing.

It doesn’t make sense to pursue perfection all of the time. Sometimes it’s better to focus on ease and speed.

When it comes to learning a skill, adopting a better habit, or changing to a better way of being, making the change faster and easier would be better.

Also, perfection is boring sometimes. Even stifling. It’s too perfect.

If you want to create anything new, trying to reach perfection in the first few iterations kills creativity.

All of this calls for making a lot of mistakes. It calls for reveling in mistakes by breaking them down and figuring out what went wrong.

If we’re honest, a lot of that impulse comes from looking to the left and to the right and comparing ourselves to other people. If we’re competitive, that can be a good thing, but usually, it’s not. We should be trying to meet our goals based on our abilities, knowledge, and interest.

Yet we’ll spend a lot of time and effort in trying to meet some arbitrary standard.

If we’re learning Spanish, for example, we’re going to take note of the fact sentences are supposed to begin with an upside-down question mark. We’ll dutifully begin all of our questions that way. We’ll try really hard to get all of the accent marks exactly right. The goal is being able to communicate with people who only speak Spanish. The perfectionism enforced by the school is a way of having criteria in place in order to sign you a grade so you can be ranked.

If we’re trying to lose weight, we might try to count every single calorie. We might note every single minute of exercise. Then we’ll try to find the right exercise and the right foods to help us get to our goal. We’ll note this in a spiral notebook or in an app.

When we do this, we spend a lot of time recording things. Wouldn’t it be better to spend that time in burning a few extra calories or preparing some healthy meals ahead of time?

We’re trying to eat mindfully. Shouldn’t there be a faster way of keeping a record?

We’re going to avidly read things to help ourselves out in areas that mean a lot to us, areas we want to excel in.

Computers encourage this “dot the I” and “cross the t” type of mentality. They’re all about data collection.

On some level, this is a good impulse. It’s a good thing to want to be all you can be.

Yet this impulse can be carried too far and often is.

Perfectionism Hinders The Person Who Is Trying To Sleep Better

It can especially work against the person who’s trying to help him or herself sleep. Sleep is a core activity of the human body. There’s a lot at stake in getting enough sleep.

The impulse needs to be extinguished. There’s a time and place for everything. Bedtime isn’t the time for perfectionism. It’s a time for settling and minimum standards. Control what’s in your control, accept what’s not.

There’s no one recipe to a good night’s sleep. You’ll never do it perfectly because there’s too many variables every day. Each day brings new challenges, troubles, events and, consequently, worries. The best you can do is get the big things right. Things like avoid worry, try to go to bed at the same time, or do the things that you’ve identified that tend to lead you to a good night of sleep.

Many times, you can make progress on whatever you want to do much faster if you concentrate on the big things. Think of them as the big rocks. Doing that helps one learn by experience.

Worrying about these less-important details isn’t going to help you get the big rocks in the box. The little things are sand. If you fill your box with sand before you get the rocks in, you’ll crowd the rocks out. Put the sand in last so that it can filter around the big things. You’ll be able to get everything in. Save the sand for “Step 2” or later. Walk first; then run.

This is especially true if you’re trying to teach someone how to do something.

If you’re teaching someone, let them know that there is a proper way, a better way, but to get the big points across first. The big points are the big rocks.

When it comes to sleep, the big rock is how you feel

Are you falling asleep when you shouldn’t be?

Do you wake up feeling groggy?

Do you find yourself getting tired in the middle of the day and have to go and take a nap — and, this is the important part — don’t want to?

When you’re having these kinds of objective experiences related to sleep, you’re not sleeping well. That matters more than, say, how much deep sleep your sleep tracker says you’re getting.

Your feeling and experiences matter more than whether your sleep tracker is saying you’re getting enough sleep.

If you feel fine and your sleep tracker says you aren’t sleeping enough, maybe the thing is broken.

It matters more than having the right mattress covered with the right sheets or anything else related to sleeping.

A predetermined proper number of hours is a guideline, anyway. An average based on studies of a number of people. You could need more or less than other people depending on your physical circumstances.

Furthermore, the number of hours you need is prone to change. If you have a day when you work exceptionally hard physically then it stands to reason that you’re going to sleep harder and longer than you usually do.

Pay attention to your body. That’s what your trying to restore. Do the things that help you sleep. Take walks or take naps. Consider your personal situation. For example, are you a night-shift worker? Maybe melatonin can help?

Acupressure helps sometimes. Methods of dealing with anxiety can help.

Learn how your body works. Do the things that help it work the best it can. The body makes a lot of its own drugs like serotonin. It doesn’t do this if it’s not working well. Doing it yourself is often easier, cheaper, and faster. At minimum, trying garners respect from people who repair things for a living.

There’s No Perfectionism In Dream Journaling

This tendency to want to do things perfectly can really backfire in dream journaling.

Even if you go point-by-point down the list of what you’re supposed to do, you’re still going to miss details from some of your dreams. In dream journaling, the details are the big rocks.

Sometimes it’s because you lack the willpower to make a few quick notes.

When that happens, that can make a person feel bad.

When he or she feels bad, they’re tempted to give up on the whole idea of dream journaling. They feel incompetent.

It’s not realistic to expect yourself to have perfect dream recall.

When you have a dream, you can ask yourself what the different aspects of the dream mean, going through the whole PACTREPS acronym.

If you don’t write the dream down, because you took the time to figure out what it meant, you still can get the benefit of the communication with your subconscious that the Dream Recovery System brings.

Concentrate on the Big Rocks. Those are the important things. As the Pareto Principle tells us, 20 percent of our actions give us 80 percent of our results. This true when we’re trying to help ourselves and in many other areas.