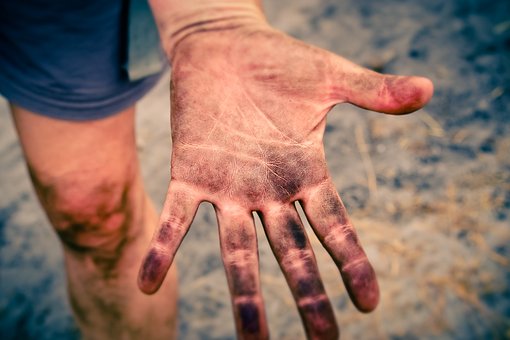 “Dirty jobs” and TV’s Mike Rowe have become synonomous over the last 15-plus years.

If you’ve flipped through cable TV channels sometime during that time you’ve probably seen Rowe doing all kinds of things. He’s mucked out the bottom of a giant chicken coop. He’s cleaned cow skulls. He’s collected vomit from many different animals. He’s grabbed snakes. He’s done all kinds of things on his show, always paying tribute to the men and women who get filthy to make a living and help society function.

On each episode, you can feel and smell the grit, grime, and feces as he goes along on his brief apprenticeship. While watching the show, you grok the need for hygiene. Used to being clean, many people today couldn’t do those jobs for 10 minutes, let alone 10 hours or a couple of years.

The show, in some ways, is a celebration of hygiene.

Along the same vein, but to a lesser extent, so is his current show, “Somebody’s Gotta Do It.”

Even if you’ve never had to go without a shower for a week, it helps you understand how showers are great.

Teethbrushing and mouthwash are wonderful.

Being able to wipe your bottom is super.

His show can turn you into a hygiene fan, or at least give you a newfound appreciation for it.

This is what people can’t help but think of when they think of hygiene.

Hygiene, however, is a wider concept than just personal hygiene.

One definition of hygiene is “practices conducive to maintaining health, especially through cleanliness.”

Though it’s not necessarily a bad thing that the general focus is on personal hygiene. Handwashing, for example, is one of the top ways to stop the spread of disease. If it’s not the number one way to stop disease, however, I really don’t know what would be. The CDC saying it’s “one of the top” is really just guarded, bureaucratic language. Life expectancy has increased dramatically since handwashing became common. If disease was the number one killer, and handwashing is the number one way of preventing disease, it could be argued that Hungarian doctor Ignaz Semmelweis has indirectly saved more lives than anyone in history.

It’s just that it would be better for everyone if understanding went a bit deeper than that.

What would we think of someone who had the job of cleaning out a restroom in a busy National Park who wasn’t too rigorous about washing their hands?

We’d cringe, knowing what we know today. We know better, much better, than they did in Semmelweiz’s time.

In addition to personal hygiene, there’s a lot of other forms of hygiene. There’s food hygiene, nail hygiene, shower hygiene, and a whole long list more.

One type of hygiene is not thought of all of the time. That’s sleep hygiene.

Sleep hygiene consists of a collection of good health habits.

It’s going to bed at a regular time. It’s sleeping enough hours. It’s keeping your bedroom at a comfortable temperature, and free of distracting influences.

Any practice that helps ensure you get enough sleep is part of sleep hygiene.

So that guy who has a job that makes him keep a smartphone on by his bedside in case people want to call him in the middle of the night doesn’t have good sleep hygiene.

For many reasons, either does that teenage girl who’s half-asleep all night texting.

Neither does that college student who’s cramming for the big test all night, thinking they’ll be ready to take it in the morning.

Chances are, neither does that man with two full-time jobs.

All of these people are shortchanging themselves on sleep with their lifestyles and decisions. They’re running up a sleep debt.

If they’re not doing it for any good reason, then, when it comes to sleep hygiene it’s the personal-hygiene-equivalent of a toddler playing with dog poop.

If they’re doing it to earn a living, then it’s the equivalent of working one of the jobs on one of Mike Rowe’s shows and not taking a shower, washing hands, or doing what it takes to clean up after the work is done.

Help Others With Sleep Hygiene

If it’s done to earn a living, then we have to be more sympathetic. Work with your co-workers who have got to be on-call all night. Try to disturb them as little as possible.

If you work the night shift, at minimum, try not to schedule appointments for yourself during the day.

You wouldn’t want some doctor who did an autopsy touching your wife or sister without washing his or her hands. Neither should you not want anything that lessens the quality of your sleep. Without sleep, anything that involves thinking gets shortchanged. That’s pretty much everything.