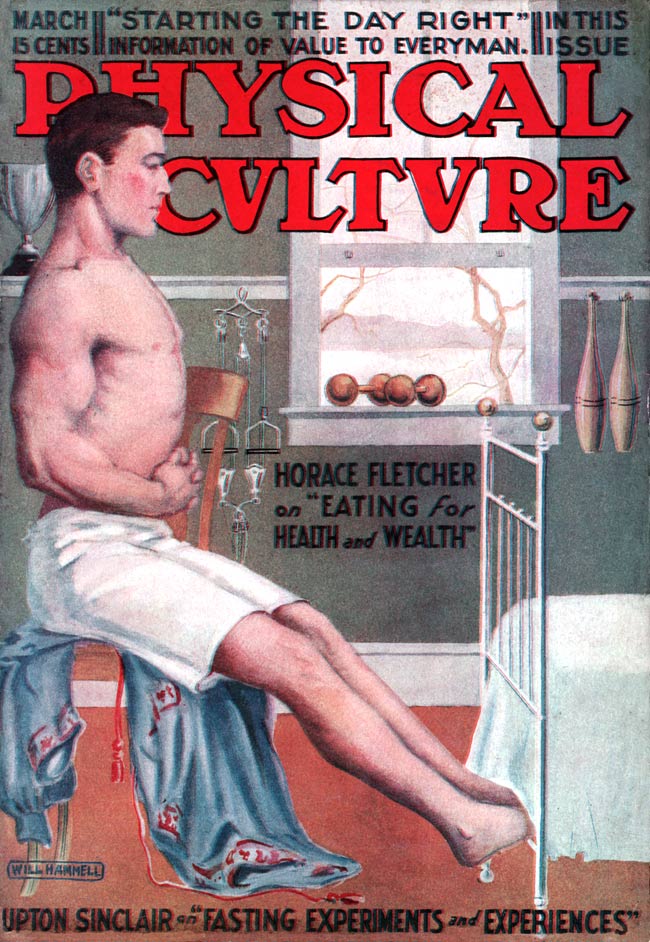 Bernarr Macfadden started a magazine and a popular movement. Both the movement and magazine had the same name: “physical culture.” Watching what you ate and seeing that you got exercise wasn’t as popular among Americans before he came along.

Weakness is a crime! Don’t be a criminal! was Macfadden’s motto.

To some, Macfadden was a kook. To others, Macfadden was motivating. He was no wimp. He’d walk for miles barefoot. To fight illness, he recommended fasting. It was part of his fight for good health for himself and others—this attitude of fighting all forms of weakness extended to sleep as well.

Occasional insomnia was of small importance, according to Macfadden. Frequent insomnia was another story, however.

Macfadden wrote that when insomnia annoyed you night after night, then “the entire nervous system must be strengthened by general physical culture methods.”

These methods included relaxing in your bedroom, nude, light exercise, and fostering a carefree mental attitude. 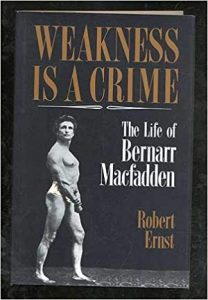 Physical culture was a hugely influential movement with many different practitioners. Macfadden was one of its leaders. Others include Charles Atlas, Jack Lalane, and Eugene Sandow. Today, one of the best places to learn about it today and about the general evolution in ideas about exercise is by taking a trip to Hot Springs National Park in Hot Springs, Arkansas.

Other places to learn about it are old issues of Physical Culture Magazine in the digital media repository at Ball State University. One can also do the Dynamic Tension Course that was popularized on the backs of comic books by strongman Charles Atlas.

Physical culture is a system of exercise and lifestyle. Insomnia is just one thing that can be addressed by its methods.

Simply put, insomnia is the perception of or complaint of an inability to sleep. There are no hard-and-fast criteria for what constitutes insomnia.

Some general causes of insomnia are nervous disorders brought on by overwork, either mental, muscular, or functional. An abnormal condition of the nerves can be produced by eating too heartily, and by working too hard either with muscles or with (the) brain. Extreme mental activity, great mental excitement, will often induce insomnia. The want of exercise, sedentary habits, and the internal functional derangement produced by this are frequently contributory causes, Macfadden wrote.

The excessive use of alcoholic and other stimulants will often induce a nervous derangement that will be accompanied by insomnia.

Chronic sleeplessness is a whole different problem, Macfadden wrote in “The Cause and Cure of Sleeplessness,” an article in Physical Culture Magazine in 1903.

The most usual cause of chronic sleeplessness is the habit of depending on a drug of some kind to induce sleep. This is a most pernicious habit and should be rigorously avoided.

Where you sleep can stop insomnia

Ventilation of your sleeping space is necessary, Macfadden wrote. Be sure that your windows are open and that you are breathing air as pure as the outside atmosphere. Do not be afraid of drafts, for they can harm no one.

Then do not cover too heavily. One is frequently unable to sleep because the body is overloaded with covering. Be careful to remove all clothing that you may have worn during the day, Macfadden wrote in 1903.

There are many reasons sleeping naked is good for you if positive. You’ll be cooler. It builds confidence. More skin-on-skin contact with a partner. It’s nothing new. Many other physical culturalists recommended it back then too.

If you find that you are unable to sleep, drink a glass or two of water and take from 20 to 25 deep abdominal breathing exercises, though first be sure that the room is thoroughly ventilated, Macfadden wrote.

Deep abdominal breathing exercises are a type of “relaxing exercise” that physical culturists advocated to relax. W.R.C. Latson, M.D., famous for writing The Secrets of Mental Supremacy, wrote relaxing exercise was necessary to support an unremitting determination to relax at all times and under all circumstances.

You are never too tired to take a relaxing exercise, no matter how tired or irritated you are, Latson wrote.

Yoga and tai chi could be considered a form of relaxing exercise. So could clenching and releasing the muscles of the body, as with a full-body isometric contraction.

Macfadden recommended taking an “air bath.” This simply means exposing all of your skin to the air. This can be followed up with a cold bath with a wet towel or sponge.

If your mind is occupied with something extremely interesting, try to divert your thoughts to another channel. Think of something that is (boring) and commonplace, Macfadden wrote.

In short, don’t worry about your inability to sleep.

DEVELOP A “DON’T CARE” ATTITUDE. Try to make yourself realize that you don’t care whether you sleep or not. At least, lie there calm, satisfied, and restful. You can really secure a vast deal of rest without sleep if you only can develop this mental attitude. If you can make yourself believe that it is of little importance whether you sleep or not, you will often lose consciousness immediately, Macfadden wrote.

Having a good diet can let you sleep too.

Macfadden recommended green salads or salads consisting of onions and lettuce with a french dressing of oil, lemon juice, and vinegar.

If this doesn’t work, your sleeplessness is either chronic, or there are very exciting influences in you.