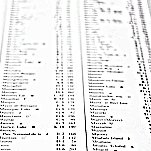 If you think every dream you journal is going to be profound, surprising, or funny, you’re going to be sorely disappointed.

Some dreams are boring.

The themes of some dreams are so dull, so obvious. They’re like something off of ATRRS in the Army or produced by the human resources at a large company.

Tell me something I don’t know.

They preach what you already know.

When you talk about separating the wheat from the chaff, these dreams are definitely the chaff.

They remind you of what’s obvious. They nag you in the same way an insecure person tells you of the same things repeatedly.

In real-life, ethical situations and dilemmas come in shades of grey. They’re tricky. That makes them interesting. Never are they so black and white as they are in the world of human resources training videos.

If the dreams aren’t about ethics, they’re full of reminders about reminders as to how to do your job.

Their character isn’t all that much different from a parent who reminds you to do something repeatedly. They nag. They annoy. To say these dreams emphasize the basics is to be trite and overly charitable.

Required, mandatory training proffered by human resources departments of companies big and large comes up every year. Often it’s at the same time.

Before computer training was widespread, this used to be accomplished by display boards and in-person reviews. These days it’s all usually accomplished online.

Stealing from the company is wrong.

Lift with your legs and not your back.

Don’t think of bringing a flash drive in here and connecting it to one of our computers.

On and on. There are hundreds of these obvious gems varying only a little depending on the industry you work in.

I feel sorry for people who work short-term, temporary jobs. During a year, they can have five or six sessions of this self-evident training.

To summarize, of the four individuals I’ve spoken to recently about this, they said, Yes, it’s stupid, but as long as they pay me, I’m okay with it. There are worse ways to make a buck.

That’s a practical attitude to have, though I’m surprised someone hasn’t thought of offering standard courses for these workers that could cover them from company to company. You’re talking hundreds of millions of dollars wasted on this every year.

There’s no reason annual mandatory training couldn’t be fun, but fun isn’t the purpose. The purpose is to check the box that you’ve been told.

The subconscious puts effort into underscoring things you know pretty well too.

You probably didn’t realize this until you started dream journaling.

If you’ve never gotten new information you didn’t really consider, and this is the only kind of dream you’ve ever managed to remember, you couldn’t be blamed for thinking dream journaling is a waste of time.

However much I might be railing against it, if the mind is doing this kind of memory-reinforcement on its own, there’s probably a good reason for it.

In my dream, there were four names on a page. Looking at the list, I knew there were a lot of candidates for the job. That was a good thing. I’d have to make a decision, but I couldn’t go wrong with so many options.

Unfortunately, little lines started appearing through some of the names. They kept getting erased until only a couple of the names were left. One name at the bottom began to disappear. I worried about whether there would be any left.

The message was that as time goes by and you find more about the candidates, many become less-than-ideal for the position. What seems like a lot of options to fill a position are actually very few. Things aren’t always what they seem.

If you don’t keep a dream journal, you’re going to forget a dream like this by the time you wake up.

This kind of dream serves its purpose. Connections between neurons are reinforced. You’re going to remember the essential teaching that things aren’t always what they seem, that what can, at first, appear to be an extensive list, can actually be a much shorter list in reality.

Dream journaling turns dreams into movies. That one was a mandatory training film. It’s probably not fair to compare it to a profound dream or one that was very enjoyable. The compulsory training film is there to do a job, and so is that dream. Remembering the theme of the dream, that things aren’t always what they seem, is a good thing to keep in mind.