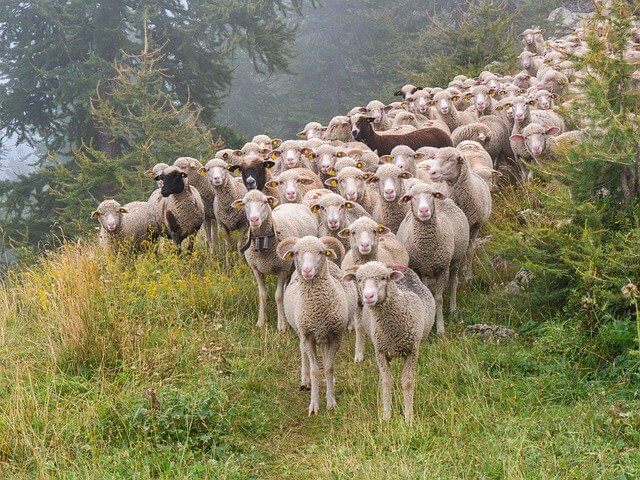 Why do they tell people to count sheep when they can’t sleep?

Here’s a guess: among domesticated livestock, sheep are pretty docile. When you look at your typical flock, you’ll see the fluffy quadrupeds blankly munching away on grass or feed. They’ll stare back at you blankly. Time stops. Clouds float by in the sky. The sun crosses overhead.

The sheep aren’t dangerous. You can relax.

Look, nobody farms really dangerous animals (one exception being rattlesnakes and that’s because antivenin sells for a lot of money). Cattle will gore you. Cows will kick you. Hogs will charge you. Chickens will flap their wings unpredictably and startle you. Sheep will bleat very loudly. They’ll stampede too, but that’s the case with a lot of animals.

Actually, you’re the one who has to protect them from danger. Shepherds in the olden days had to practically sleep with one eye open, vigilant sheepdog at their side.

Sometimes the danger was from a predator like a wolf or a mountain lion. Other times it was from trouble of the sheep’s own making, like getting stuck in a fence or falling into a ravine.

It was the kind of job few could get a handle on quickly. Many could do it but few could do it really well. Sheep raisers in the United States believed young Basque men from Spain and France made the best shepherds. Under their stead, the herds were more productive under a variety of measures. A lot of those jobs went to them.

If you’re of Basque descent, you can maybe ask one of the older members of your family was like to be a shepherd. There may be some family stories. Shepherding was a common means to an end in order to emigrate to the United States.

If not, you’re going to have to use your imagination.

Beyond keeping in mind some basic principles of sleep, how are you supposed to do this? The ability to quiet your mind is one of the main drugfree ways one can become a super sleeper. It’s important.

First, relax your arms, then your legs. Imagine a hilly field with sheep standing on the hillsides as far as the eye can see. Picture yourself walking among the sheep, counting them—one, two, three, four, etc.

It’s boring, but the idea is you’ll be so bored that you’ll fall asleep.

You can employ this method and it has been known to work on occasion. However, researchers who studied this method back in 2002 found this way to count sheep as the least effective. There was little distraction. When it comes to combatting a churning mind, more entertainment is better.

Imagine a big field with an endless flock of sheep.

The idea here is to slow your brain down and think about something other than what’s bothering you.

You can have fun with the images in your head by playing with them. Play is something adults spend too little time doing.

Imagine a big field with an endless flock of sheep on one side of a white picket fence. The barrier divides the field. You’re standing on the side of the fence with all of the sheep. Your job is to get all of those sheep over to the other side. The only rule about how you get them over is each has to go over the fence uniquely.

The first one jumps. That’s fine.

You have to get out a trampoline to get the next one over.

It jumps on the trampoline, and it springs over the fence.

The next one, you need to call in a big eagle to pick it up and drop it over on the other side.

A hound dog comes and digs a hole to the other side that allows the creature with the white coat to go under the fence. When it emerges on the other side, it’s dirty.

You can take it from there.

Again, the idea is to relax, dream, imagine, and have fun. Playing with the concept mimics the state of dreaming.

In this scenario, the sheep are being led through a gate. The trick is, however, that you have to lead them through in groups that consist of one more sheep than the previous group. Then you have to add the total in your head.

Your first group is one.

Your second group is two. Added to the first group that makes three.

Your third group is three. Now you have six sheep on the other side.

Then four more sheep come along. At this time there’s ten.

The herd gets bigger still and keep adding and counting.

The key to this sleep-promoting technique is mental playfulness. That can be a feeling that’s hard to reach for some people some times. You may need to offload stress in some way. One good way is to figure out which of your concerns are in your control. Then, come up with a broad plan of action to address them. Then, whatever isn’t in your control, turn over to a higher power.

By allowing yourself to be playful and actually enjoy the process of relaxing and falling asleep you’ll find that you’ll be able to shepherd in refreshing sleep and good dreams for yourself.

Having the opposite problem? Try this the next time you wake too early.