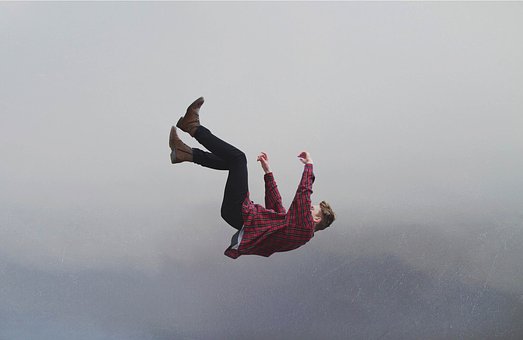 You wake up. You gasp. It takes a moment to get oriented.

You exhale. You relax. Good. You’re not dead. You landed in bed — or wherever else you fell asleep.

This sensation is known as a hypnic jerk. It happens to a lot of people, and it happens a lot. One theory posits it’s caused by the neck muscles relaxing as you’re falling asleep.

What starts the sequence? In-dream, you could be doing something on the edge of a cliff, and you fall off. You could be walking on the roof of a house, and you fall through. You could be in a plane that breaks apart and start falling out of the sky. You could be getting ready to jump out of a plane, and your parachute doesn’t open. That’s why that explanation doesn’t ring true. I suggest the hypnic jerk is nothing more than the natural progression of the particular dream. The mind is following a logical sequence.

You fall, you go boom in the dream.

And then you wake up with a start.

Whatever the reason that causes it to happen, some people find the experience disturbing. They’ve gone from believing they were falling uncontrollably. They were ready to die. Suddenly they’re not. They’re alive. It bothers them.

Others immediately laugh off the whole experience, happy to be alive.

A lot of the reaction seems dependent on their personality.

The phenomena amount to little, though some people have this happen to them again and again.

Here’s what I’d try: the next time you find yourself falling in a dream, try lucid dreaming. Imagine yourself sprouting wings and flying. Imagine there’s a jetpack on your back. Imagine you fall onto the back of a large bird or that you land in the cockpit of a glider and that you soar away. Try not to hit the ground.

You have nothing to lose.

Even though a lot of people try to dream lucidly regularly, I don’t recommend it. I don’t believe it’s a good idea to do so. I want my subconscious to communicate with my conscious mind; however, it can. I want the ideas it comes up with to be available to me. I want to understand the symbols. If you try to dream lucidly, you’re not letting the subconscious have its say. You’re intruding on its turf. The waking hours belong to the conscious mind. Dreamtime belongs to the psyche. You’re giving up an awful lot for novelty that doesn’t amount to much.

There isn’t much to be gained by hitting the ground, however. You know you’re going to awake with a start. That’s why I say if you can manage it, fly.

Another relatively common dream phenomena are the exploding head syndrome. You’re not going to have a chance to dream lucidly with this dream. The loud noise — or explosion — happens suddenly.

If you find yourself falling, however, go for it, especially if you seem to be falling for quite a distance. Try lucid dreaming, though it might take several attempts to develop that sleep skill. The experience could be a lot of fun. There’s not a thing wrong with having that kind of fun now and then.

An even easier method to achieve a lucid dream is to have one while doing a moving meditation.