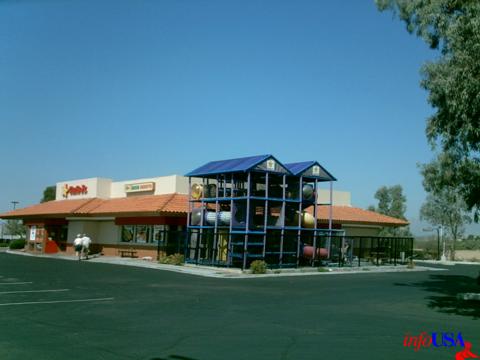 Six Carl’s Jr. fast-food workers stood ready to take on the problem: a home in disarray.

I had too much to do in too little time. I was fretting. This team would help.

Actually, I don’t have an exact count of how many fast-food employees there were in the dream, all decked out in their brown shirts with rainbow collars. I didn’t make one. There were more than three, probably more than four. Crowded together, they were a team. Young men and women. All ready to help.

If this was somebody else’s dream, what would the fact they were Carl’s Jr. fast-food employees mean? Maybe the association would be something about food like the dreamer was hungry or had been hungry, and the workers were there to make lunch. That’s probably what a dream dictionary would say. You really want a hamburger.

Or: Chicken nuggets are important to you.

Maybe the dream would have something to do with the fried zucchini topped with ranch dressing. That’s my all-time, unique to Carl’s Jr., favorite side dish.

It goes without saying the old Carl’s Jr. uniform is a symbol that isn’t in the dream dictionary. I can’t even find a picture of them, though they were in service for years. Probably nobody liked how they looked in them and didn’t want to take a picture.

Apparently, these old brown uniforms are poignant to me. They appear now and then in my dreams, recurring.

The particular restaurant is significant. I didn’t work at Wendy’s very long, maybe a couple of weeks. The location I was hired at was about 24 miles from my house, and I needed more hours.

The Pizza Hut I worked at didn’t get much business. They weren’t selling many pizzas, doing only a little more than $100 per night. Even in the mid-80s that was terrible for a restaurant, kids.

If the workers were dressed in Wendy’s or Pizza Hut uniforms it would mean completely different things.

I worked at Carl’s Jr. for about two years, an eternity in a high-turnover fast-food environment. It was the place where I learned about corporate culture, where I learned to work very hard.

While I had other jobs before in my life, and I worked hard at those, too, the hard work at Carl’s Jr. was very different. It was formative.

Delivering the newspaper would be the same every day except Sunday. The number of subscribers didn’t vary too much. Sunday papers were heavy, and I had to make a couple of trips on my bike.

Selling coffee at bingo was also the same pretty much every time. The crowd varied only a little each night.

At “the Junior,” work conditions varied. You had to step it up from time to time. The rushes could be somewhat unpredictable. We’d regularly get tour buses and crowds of hungry shoppers from the warehouse shopping club across the street at lunch. The crowd would only be heavy during the week and extremely heavy on the weekend.

Working at the Junior, I learned something about planning. We’d count the number of people walking up in the lobby and drop one meat patty for every person. Though we offered steak sandwiches and chicken sandwiches, charbroiling the meat ahead of time would quickly get the orders out. Almost everybody wanted a hamburger, and because some sandwiches would take two meat patties, the meat wouldn’t be wasted. We’d also drop a certain amount of fries into hot oil based on the crowd in the lobby.

The fast-food workers in the dream symbolize hard, sometimes ineffective, work. Why ineffective? You might drop a bunch of meat, but the crowd surprised you by getting chicken and fish sandwiches for some mysterious reason. Then the manager would throw away the food because nobody wanted to eat a cold hamburger. When he or she told you to do that, that went against every instinct. Most of us hated to to do that because we came from homes where “waste not, want not” was the rule.

Our managers had a thing about product quality, however. A dead, dried out burger isn’t anybody’s idea of good-tasting food.

Still, the policy persisted. Ninety percent of the customers would want hamburgers, however, so chances are that it wouldn’t go to waste. It was true often enough.

In the dream, there’s a group of brown-shirted, rainbow-collared, fast-food employees. They’re ready to plow ahead, get the job on my home done.

If I posted this on a dream interpretation board, it’s doubtful anyone would stumble upon this association. Maybe they’d mention how Carl’s Jr. used scantily clad female celebrities like Paris Hilton, Heidi Klum, and Kate Upton to sell sandwiches in the early 2000s. They’d insinuate that sex was somehow at the root of this dream. Psychiatry father Sigmund Freud related a lot to sex after all.

Nope. Not for me. I worked there in the 80s before either of those models were used to sell burgers. For me, this means stumbling ahead, physically working hard. Sex has nothing to do with it. One of my co-workers was a modestly successful model on the side. Several of the other girls could have been models too. Even they looked dumpy in a brown shirt with a pastel rainbow collar.

After work, we’d sometimes go out. I’d be amazed at how well some of my co-workers could clean up. What can I say? I was a dumb teenage boy.

When you dream, you’ll have these associations too. When you get stumped, you need to ask, “What does this make me think of?” “What did ____ mean to me?” Think about the emotion you feel and the place you were in your life. You’ll find the answer more times than not. When you don’t, remember it sometimes takes a little work. The answer is there, somewhere, tucked away in your subconscious.

Dream dictionaries and dream dictionary sites will give you the wrong information. You had the dream, not them. Dreams aren’t like words. They’re full of symbols. There isn’t any commonly accepted agreement on what the symbols mean. If you dream of someone, you’ll have to ask yourself what that person symbolizes. You need to keep in mind that there’s a difference between individuals (who that person is) and groups (what group they belong to).

What this dream meant to me was that my home was really messed up. I’d have to tackle it by doing more than one person was capable of, but I had a number of tools at my disposal. I’d have to be ready to work hard and, at times, accept working ineffectively.

As one of the crew leaders used to say when we saw a tour bus pulling up or a horde of shoppers from the warehouse club store across the street, “Let’s just jam it out.”

And that’s what I did.

Writing down your dreams helps you grow and move on.

The best way to analyze dreams for family and friends.

The meanings of the symbols in your dreams can change between dreams.