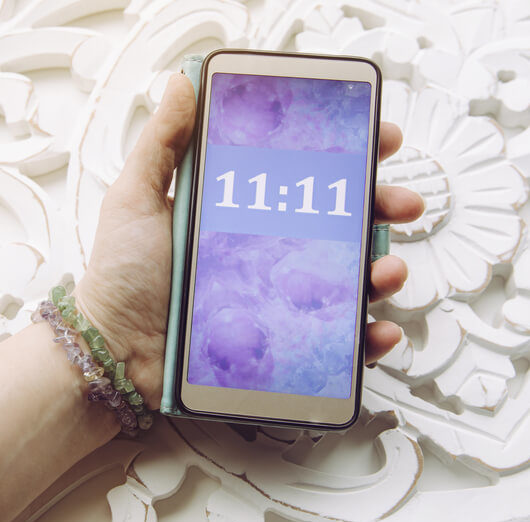 Does it mean something? Is it simply a coincidence?

Some think so. They call such numerical series “angel numbers.” They assign such a series of three or four a sacred or spiritual significance. One idea is your guardian angel is calling your attention to the series or making the numbers happen in order to communicate with you.

Do angel numbers mean anything?

For some, identifying such occurrences, such coincidences, is done in good fun, though articles or infographics on the topic aren’t labeled that way.

You might see them in your lottery numbers, at a casino, in the sign-in code your bank sends you when you try to access it online, on a digital watch, or in the amount you owe the electric company. Anywhere, really. Indeed, anywhere you see numbers, a series of three “angel numbers” could come up.

Some say that it’s your guardian angel trying to get your attention.

Really, though. Your guardian angel doesn’t have to resort to cryptic ways to get your attention. There are plenty of other tools at their disposal. It may be a coincidence.

Depending on the digits, the particular series of numbers is supposed to have a meaning.

111 or 1111- It’s an invitation to manifestation that it’s time to turn your hopes and dreams into reality.

555 – Change is coming. Let go of what no longer serves its purpose.

666 – According to sources, it doesn’t have a demonic meaning. Instead, the series indicates you’re giving too much of yourself.

777 –  A spiritual evolution is upon you. Everything is going to be okay.

999 – One chapter of life will end, and another will begin.

1010 – It’s not a real short binary code, rather it’s supposed to mean a spiritual awakening is coming.

Where can I see angel numbers?

You could encounter them in day-to-day life or in a dream. In the encounter, you might feel your attention drawn to the series somehow.

If you do notice your attention being drawn to a series of numbers, pause for a moment and ask yourself where you saw that series before. You may have subconsciously assigned a relationship with that numerical series.

Not necessarily. It’s best to regard them as neither good nor bad.

It’s fun to tell little children fanciful stories; perhaps angel numbers are best regarded as a fanciful story for a child of any age.

Why is there that rainbow?

Well, the leprechauns who live over there were happy it rained. They got out of their burrow and started dancing around. When they did, they kicked the lid off of the top of their bucket of gold, and the rainbow shot out of the top.

It’s all done in fun, and fun it is. The child imagines finding the gold and taking it from the leprechauns. Many kids know you’re being silly and fun.

For some people, angel numbers are something like that. A fun thing to see in your encounters.

It’s along the level of watching a show and taking a drink of an alcoholic beverage every time a certain word is used.

Whether the angel number messages come from your angels is another matter.

Why wouldn’t your guardian angel opt for sending you a direct message? Why be so mysterious that you’ve got to look at a chart to see the meaning on a chart?

Your guardian angel or spirit guide is plenty capable of giving you feelings about one thing or another, like a touch that feels like an electric shock on the back of your neck.

Can angel numbers foretell the future?

If you put any stock in the supposed meanings, why are all of them positive? Is there any reason to believe your future is going to be uniformly positive, that you’re never going to make any mistake that you’ll regret, or that trouble won’t find you? Wouldn’t a warning, if it was valid, be far more useful? Like, “Hey! Cut that out! Don’t do that!”

The idea of angel numbers that you see in your day-to-day life is fun. Yet you can’t necessarily look upon that for any kind of symbolism as in the chart above or online, especially if it’s not accompanied by any other feeling of love, charity, or amicability.

An evil spirit, demon, or whatever you want to call it, regards you as prey, desiring to feed off of your misery. You’re more likely to have a feeling of danger or fear or neutrality.

Of course, going along with your feelings, your intuition, in a certain encounter is far from foolproof. You have to pay attention to other signs as well and have a basic understanding of right and wrong as well. For example, if you detect a feeling of love and you interpret the numbers as telling you to steal something, that’s not at all reliable. That’s a lie. Stealing (under most circumstances) takes you further from what’s right.

When it comes to your dream, you must consider the angel numbers as you’d consider anything else. Figure out what it symbolizes by asking what the numbers mean to you and then consider it within the dream context.

For the other numbers you see, don’t take them too seriously unless you feel there’s a good reason to.

No. They are not. There is nothing in the doctrine of any mainstream Christian faith that speaks to them. In fact, it depends on the intent of the person who’s discussing angel numbers. Most Christians would say that if you want guidance, read the Bible and ponder the parables and life of Jesus.

If the person notes the occurrence of angel numbers in good fun, Christians, in general, see nothing wrong with it. If they’re regarding them seriously as a way to foretell the future, that’s traditionally regarded as a sin. It’s not, for example, prayerful discernment.

What nobody will tell you about your guardian angel.

The Dream Recovery System has affiliate links in some banner ads. If you click on such a link and make a purchase, we may receive a small commission. This arrangement has no effect on our opinions.