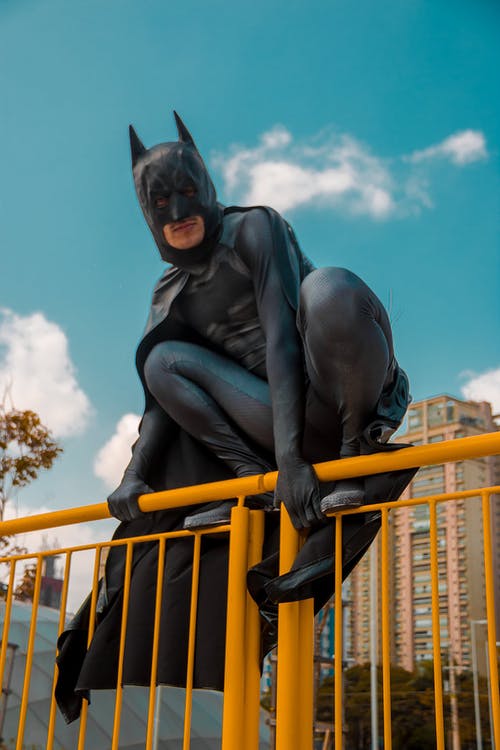 Yes, he does. His power is his mind. Also, he has all of those gadgets on his utility belt. Those gadgets are the equivalent of superpowers.

He can also travel around Gotham using cables and ropes.

Can you do that?

Add to that the fact that he’s a billionaire and that makes him a superpowered superhero.

So he doesn’t fly like Superman or have lightning-fast reflexes like Wonder Woman when she uses her bulletproof bracelets. It doesn’t matter. Batman’s powers are superpowers. That’s why he’s a member of the Justice League and the Superfriends. Batman can hang with all of the other superheroes. If he couldn’t, they wouldn’t want him as a member.

You, too, can be a version of Batman, a superhero.

You, too, can have superpowers as compared to that undisciplined version of yourself who neglects a healthy bedtime routine.

It’s important, however, that you don’t copy the character outright. Batman is covered by copyright. Be original!

If you want to be a super sleeper, you need to have a consistently good bedtime routine.

This is not something to be taken lightly. A good routine is powerful. Combined with the high level of recovery that sleeping well provides, it’s almost enough to give you Batman-style superpowers!

Of course, if you want actual Batman superpowers, you need to work at it. Having a consistent bedtime routine is part of the basics.

With a consistent bedtime routine, you may find yourself using incisive deductive reasoning, tapping into your innate creativity, and approaching the day with more serenity even as you hunt down evildoers coldly and methodically.

Batman overcame intense trauma stemming from the violent way his parents were executed right in front of him. He’s the owner of Wayne Enterprises and fights evil as a superhero. Of course, he inherited a lot of money from his parents. He probably has that advantage over you, but still, the man deserves credit for not wasting it. Lots of people in similar situations have.

You, too, could make the most out of what you’ve been given if you had a consistent bedtime routine. There’s a lot of power in waking up in the morning feeling refreshed and incredible.

Various aches and pains would disappear. You’d find that you were a lot happier on the inside and out.

Sleep is a basic need. As such, it feeds into all of the other higher-level needs.

Ultimately, you’ll find yourself being able to sleep less and remain healthy.

A bedtime routine is a habit

Willpower isn’t something that can be easily measured. It’s hard to count, unlike money in a checking account. Nevertheless, it’s a finite resource. In the same way you find with any other limited resource, some people have more of one thing than others.

Some people have so much willpower that we say it’s like steel, as in a “steel resolve” or a “steely will.”

Bruce Wayne (Batman’s secret identity. Shhh! Don’t tell anyone! It’s a secret.) has both a lot of money and willpower.

You can think of yourself as “spending” willpower just like you do with money.

As with money, you want to be a savvy shopper, not an impulse buyer. A value shopper gets the most bang they can for their bucks. They’re the ones who come home with the good deals.

Like with any other currency, it’s easier to get more if you have more. The thing is you need to make the most of what you do have.

The Parable of the Talents is a profound lesson in the Bible. In it, one servant receives five talents, the next two, and the last servant, one, each according to his ability. A talent is a measure of gold and silver. Being that it’s a mix of both gold and silver and that a physical object like that has a different relative worth over time and in another society, perhaps it’s best to think of it as one talent being worth $30,000.

Don’t be that guy, the one who buries the $30,000 doing absolutely nothing with it only to return it to the master. The master calls him “lazy and wicked.”

So how do you invest the ability, hours, and days of life you’ve been given well?

It’s both simple and challenging.

Simply put, with willpower currency. While it’s simple to understand what it is, it’s hard to have sometimes. Habits provide a cheat.

Buying stuff with willpower currency when it’s on sale

It’s harder to do something when you’re not in the habit of doing it. It costs you more in willpower.

Having the habit of doing something positive makes doing it more accessible.

If you think of willpower as a currency, the way you value shop with willpower currency is through forming good habits.

Having a collection of good habits is like being part of a value membership club.

When it comes to sleep, maybe there are nights where a ballgame runs a little long on a work night, when a movie is so good that the idea of shutting it off is almost unthinkable. Maybe you’ve got a big project you’re working on, and you don’t want to let it go.

Having a habit formed at least makes it thinkable. More often than not, you’ll make the right decision.

When it comes to physical money, there are various software budgeting solutions available that help you visualize where your money is going. YNAB and EveryDollar encourage you to put money in virtual envelopes. When you spend money with credit cards, it takes it out of your checking account and sets it aside for you to make your payment, so you don’t get into debt.

There’s nothing like that when it comes to sleep debt. With little willpower, you can find yourself staying up very late, ignoring the natural signals your body is equipped to send. Add in a naturally active mind; it’s easy to see how one can get into a sleep deficit.

The clock reaches your bedtime.

You brush your teeth.

Say “goodnight” to your loved ones.

Make sure your dream journal is by the bedside with a lighted pen.

Put your phone on standby.

Put the memory device on your opposite wrist from where you’d wear a watch.

Review the day. Turn over whatever is beyond your power to control to the man upstairs.

Create your bedtime routine to fit your goals. You’re the one in control.

The Riddler, Joker, and Penguin aren’t safe from the Batman. When you create your bedtime routine, your villains won’t be safe from you either.

Vaccinate yourself against psychosomatic illness

Get to your goals! Sleep less and stay healthy.