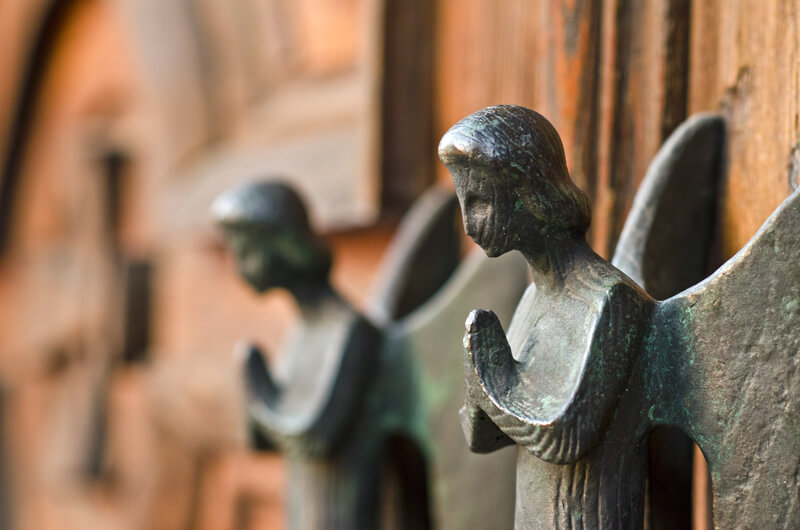 Most Americans believe in angels.

According to a Harris Interactive poll from 2009, the number was over 7 in ten. That’s an older poll, but there’s no reason to think that today’s number is any less than the majority.

Has there ever been an effective security checkpoint that’s operated merely based on feeling and not some definitive form of personal identification?

Rather, you’re going to need to put together clues from the interaction that the entity is an angel.

Many things in this world don’t come with labels; guardian angels are one of them.

When it comes to identification, an angel’s non-corporeal nature is fraught with complications.

It’s only natural. Should we say supernatural?

When another human is talking to you face to face, you can see them.

With another person, you can both see them and hear the tone in their voice besides the words in their sentences.

All of those factors combine to help you understand the message the human with a body is trying to send.

None of that is present with a non-corporeal entity. You’re reduced to relying on images in your mind and feelings.

That leaves out a huge amount of information compared to how humans usually “do” communication.

It even gets more complicated than that.

Psychologist Albert Mehrabian developed the 7-38-55 rule after he demonstrated only 7 percent of a message consists of the actual words in communication. Of greater importance are tone, intonation, and volume.

While Mehrabian’s percentages are accurate only about messages about liking something or something, the main point here is that a lot of information is conveyed non-verbally.

When you are dealing with an entity that doesn’t have a body, you’re often going to only have feelings, not words.

Sometimes you’ll have words, however.

Sometimes you’ll only have images.

Sometimes you’ll see something physical and then receive a prompt.

The entity chooses how they’ll communicate; you get to choose how you’ll interpret the message.

People have psychic abilities in a range. Some people have been gifted with more consistent abilities than others. Some have it temporarily, and then, for whatever reason, it goes away.

As with anything, there are superstars. People like Edgar Cayce would fit in this category.

Most of us are pretty average. We might get the feeling that a loved one is trying to communicate with us. Maybe we see a rainbow. Maybe a butterfly, and maybe we take that as a meaningful message.

Because they don’t have bodies, it’s easy to get mixed up with what role they might play in our lives and what classification of spirit they might be.

You always have to pay attention to the current of emotion in the air and this may or may not be difficult.

I feel like I have to be really careful when dealing with a discarnate entity. If you’ve ever had to deal with one, I’d advise you to be careful too.

You have to be skeptical of anything you’re told or that is revealed to you.

Most of the time you can’t verify a single thing they tell you. Sure, my guardian spirit put together all of these random scenes from my life and let me know who he was. Then he let me know a name. That’s a plan.

And that’s really him? Maybe. Maybe not. Discarnate entities carry no identification.

Angels are supposed to have existed since the beginning of time. Spirits, no. The part about Vietnam is hard to be clear about. I call him a guardian angel, but that doesn’t necessarily mean he’s literally an angel.

You’ll hear all kinds of stories of telepathic communication like this. It’s far from unique to me. Some people talk about voices in their head that tell them to do awful things to themselves and to others. Many people believe in demons, ghosts, and other things like that.

One fact is this: you can’t always simply go along with what others tell you to do, and this carries over into the physical world, too. You can’t be too much of a people or entity pleaser. You have to have a sense of right and wrong, a personal philosophy. Sometimes you have to just say “no.” Use your head.

When I had been getting those dreams of the helicopter crash, I didn’t identify that as coming from this entity. That’s how he died, however. Perhaps he was using scenes of his death to influence my life as I was thinking of joining the National Guard at that time. Why he interfered with that decision and not the decision, later on, to join the Army Reserve, I’ll never know.

Other than that, I have no relationship with him.

I don’t think I’m really supposed to. The point is, is that when we die, God isn’t done with us. We still have work to do, whatever it might be.

We get a guardian angel when we’re born. This person died two years after I was born.

If he’s been with me since then, why me? Millions of kids were born. Why that relationship?

That I’ve had such a relationship, that these memories were strung together like that, means there was someone paying attention that I was dealing with an intelligence outside of my body.

Sitting in front of the computer, there was nothing that would naturally bring the memory of that girl’s first boyfriend’s last name and the various memories relating to Kansas to mind. There were 50 states in front of me on the computer screen. I could have had a thought about any of them like that. And, further, they were specific to me. According to the tourism websites, when most people think of Kansas they think of The Wizard of Oz, the Jayhawks, tornadoes, or barbecue.

There are a lot of different entities. It can be hard to tell one from another.

It can be scary. You’ve sinned. You’ve done things that weren’t right. God loves you. Evil entities that are there to prey upon you.

Guardian angels aren’t there to get your worship. They’re there to help you. They serve God. That could include spirits too.

Throughout human history, people have had a lot of experiences with the supernatural. Many of these experiences come when we’re asleep in the form of dreams.

This, however, isn’t the only time one can encounter an element of the supernatural like a guardian angel, a demon, a ghost, or a spirit. You can encounter them during waking hours as well.

You never should shut off your reason because emotion isn’t a reliable verification of the truth. Sometimes your intuition can give you a warning about a situation. That warning should be checked against your reason.

Don’t be in awe that there’s a realm that we, as humans, can’t see. Accept the fact. While there are good entities, there are bad ones too. And you’re at a distinct disadvantage. Good ones protect, enlighten, and guide. Bad ones suck power from you, harvest fear.

The best thing you can do is to walk in faith, not fear.

Special exercises before sleep can help your blood pressure

What marketing theory can teach about sleep

The 100% truth about learning anything while you sleep

The Dream Recovery System contains some affiliate links in banner ads. If you click on a link and make a purchase, we may receive a commission. This has no influence on our opinions.