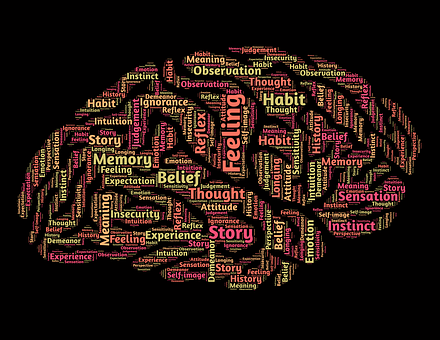 What’s the difference between the brain and the mind?

They’re up in your head together.

Is there a difference?

It’s good to understand the difference, however. Different actions benefit and harm the different parts.

The brain isn’t better than the mind or vice versa — not at least while you’re alive on Earth. You need both.

Someone might say, “Doing crossword puzzles improves your mind.”

We’d say, “The puzzles are improving the brain” if we were being precise.

Say a person decides he has a bad tendency to speak rashly when he gets angry. Say he decided he was going to count to ten before he said something the next time he got mad. Then he does it.

The brain is in the physical world. It’s the place where the mind resides.

The consciousness, or mind, is you, the person who’s reading these words. It’s in the physical world but is connected to non-physical spaces too. It straddles the dimensions.

The brain is the part that gets refreshed from sleep. It’s the part that controls the nerves that sends impulses to your foot to make it shake. When a blood clot travels to one of the vessels in the brain and lodges in the middle, it’s the brain that suffers a stroke.

The consciousness, your mind, is what’s experiencing your life. It’s the part that suffers despair, hopelessness, and experiences euphoria.

A great example of how they’re separate are people who have had out-of-body experiences. Many people have had the experience of being declared clinically dead. Their heart stops pumping blood. Therefore blood isn’t feeding their brains with a ready supply of oxygen and glucose. When that happens, the brain starts to die quickly.

Suddenly, their heart is restarted after several minutes. They come back into their body. It’s interesting to note there are a lot of commonalities in their stories. If the experiences were actually hallucinations, you’d expect considerable variation. People have all kinds of hallucinations. Why wouldn’t it be like a dream? People dream of all kinds of different things.

When you get enough sleep, eat right and do the things that mechanically take care of your body, you’re helping your brain.

When you avoid self-destructive patterns, process emotional reactions in a positive way and develop an understanding of the people in your life, you’re helping your mind.

The lack of differentiation between the two has consequences when it comes to things like treatment of mental health problems like depression and schizophrenia. Anatomy of an Epidemic by Robert Whitaker documents the study, marketing and misuse of psychiatric medications.

The mind may bring out the brain out for a night of drinking, intoxicating it. The brain may become damaged as with a head injury when the skull that contains the brain hits the floor of the bar causing the mind grief.

They’re tied together while you’re living here on Earth. It’s to be understood how they can be mistaken for the other.

The concept of “soul” has a lot of similarities to “mind.” After death, in some religions, they believe the soul has eternal life in the hereafter. In others, they believe the soul gets reincarnated. What happens after you die is not directly pertinent to this topic and when we speak of soul we’re often speaking of the afterlife. We’ll stick with calling it “mind.”

It’s only important to understand that “brain” and “mind” are different, though they’re tied together while you’re alive.

A doctor attempts to quantify the weight of a soul.

Anatomy of the Mind: Just Like the Moon, The Mind Has Phases Too (part 2)

Anatomy of the Mind: Call It the Semi-United States of the Mind (part 3)