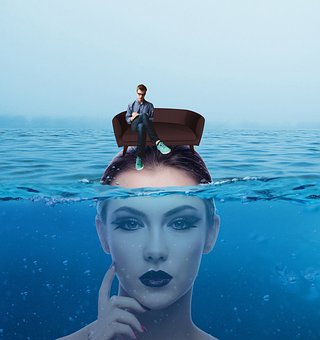 The brain is physical. It exists in the physical world.

The mind is nebulous. It’s your consciousness. It’s not entirely of this world.

The brain has a physical makeup. That makeup is called anatomy.

So, too, does the mind have a makeup. The makeup is called a mental state.

The mental state can be compared to the anatomy of the brain.

If we were considering the brain, we’d say the brain’s frontal lobe controls the movement of your legs when you’re walking.

If we were considering the mind, we’d say your conscious mind decides to walk.

In the first instance, we’re speaking of the brain’s part in controlling the ability to walk.

In the second, we’re talking about the state of mind you usually have to be in to walk.

The States of Mind

The Conscious Mind: This is the state in which you complete most of your daily activities. When you’re in this state, you’re focused on the world outside of you. You’re going to be making decisions based on past experiences (knowledge), other people, the media, etc. You’re typically awake, and your eyes are open.

The Subconscious Mind: This is the mental warehouse. These are your memories. Experiences from your conscious mind go here for processing. Dream journaling allows you to tap into these experiences and bring them up so you can process them.

Sub-subconscious Mind: This is a conglomeration of your actions and reactions where one has merged with the other. They’ve become habits. You’re not thinking about them actively, but they leak out into both the conscious and subconscious. This area would also include innate habits like reflexes, though not necessarily physical reflexes like those tested when a doctor taps your knee with a rubber mallet (patellar reflexes). Physical reflexes are a manifestation of the way your body is constructed.

Superconscious: “The Mind of Light.” This is the state yogis and meditators try to reach. It’s a place of calm, inner peace in some people. In others, it can be a troubling place. It’s the part “out there.” When people pray and meditate, it’s the place they’re trying to reach for some stress relief.

Subsuperconscious: This part of the mind is a sort of filter working to send intuitive flashes from the superconscious through the subconscious and, when you journal your dreams, into your conscious mind. It figures in some metaphysical writing and when you consider psychic communication.

Note: Much of the writing on the superconscious focuses on how it’s this state of bliss, a kind of nirvana. Considering the wide variety of experiences people have, it wouldn’t always necessarily be so. For example, when someone feels certain doom is impending, that would be far from a blissful state, yet the messaging would take a similar form. People throughout time have reported feelings the world is doomed or going to end. We need to take them at their word that they feel this way.

Processing these inner feelings can lead one to the state of bliss, but if we’re talking about mental states, it’s mistaken to think it’s always that way. In the study on Near-Death.com, the feeling of overwhelming love was reported in 69 percent of near-death experiences. That means 31 percent of them didn’t have that kind of experience though it wouldn’t necessarily mean they had a feeling of torment. The survey did not specify.

Altogether, knowledge of the difference between the brain and the mind, the phases of the mind, and the states of mind gives you a kind of road map as you experience your mind through your dream journal and as you begin to know yourself honestly.

Some people talk, too, of the unconscious mind. When they do, that refers to a place where repressed thoughts and feelings are pushed to when they threaten someone’s self-identity, when it threatens what they feel is good or right to do or when it’s a matter of survival.

Anatomy of the Mind: The Brain and The Mind Aren’t The Same Thing

Anatomy of the Mind: Just Like the Moon, The Mind Has Phases Too