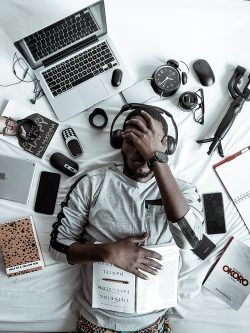 It’s common to believe we should support the businesses espousing our values and avoid supporting companies that don’t.

They call it “voting with your dollars.”

It makes sense on the surface. Sometimes other people see things differently than you do for one reason or another. This is one way of encouraging their enlightenment. If they want your business, they better make some changes!

Nineteenth-century showman and circus owner Phineas T. Barnum said, “There is no such thing as bad publicity.”

Even today, that’s pretty true.  With a divided country, if you make half of it mad, the other half will make up for it and reward you with increased business.

There’s a sense to the continual controversy, overall.

Does that mean it belongs in your bedroom?

You need to answer that question for yourself, but I don’t think so.

Your time and thoughts before going to bed and sleep should be about transcending these kinds of concerns. They should inspire a positive frame of outlook, or at least a resignation that we don’t really know what the future will hold. All kinds of incredible things can happen and often do.

Even neutral thoughts, like the kind you get from counting sheep, are better.

The bedroom should be a sacred space.

Superman had his Fortress of Solitude. You can have your own version.

Ads are a form of controversy too, inspiring wants.

For kids, having a TV in your bedroom at age 4 leads to a higher body mass index at 13.

It’s not great for adults either.

Many of the shows are full of tension and conflict, just like the news.

More controversy. It might make for compelling news. Stories with tension are always popular.

Does it make for good, healing sleep?

Keep your thoughts focused on what’s good; the people you love, hope for a better tomorrow, and causes and outcomes you’re cheering for.

Leave the cacophony of consumer and political controversy outside its walls.

Banner ads on the DRS contain affiliate links for which we receive a small commission.