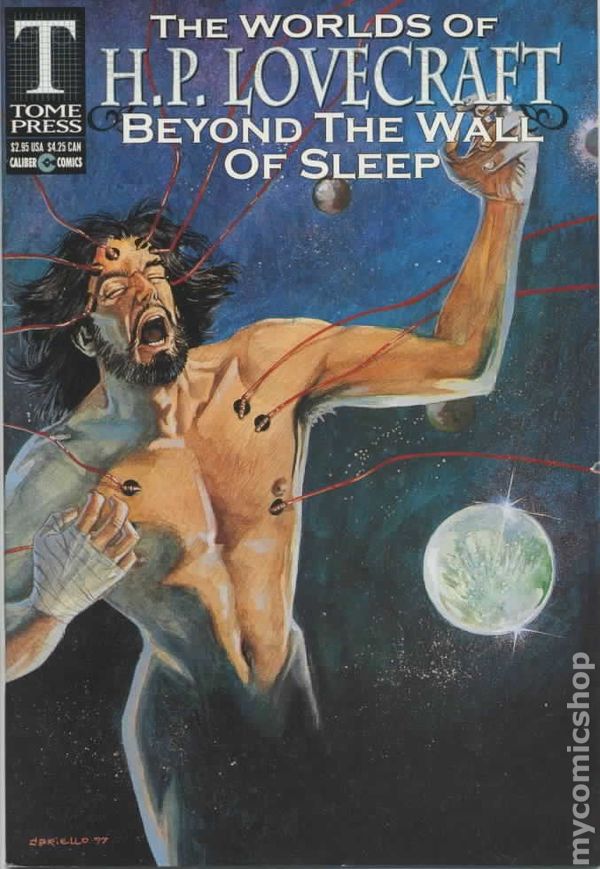 Sleep and dreams play an interesting role in art.

It’s only natural the state inspires some art and provides the setting for other art. It makes up about a third of a human’s life.

From the beginning, sleep had a lousy name in Western culture.

When it comes to modern times, the attitude is mixed.

The “Walls Of Sleep” refers to experiences you might have while sleeping. Nobody else can see and experience those sights and sounds with you.

In the 1919 short story “Beyond the Wall of Sleep” by H.P. Lovecraft, we learn that while sleeping, humans can experience the vistas of many planes and universes that remain hidden from the conscious mind. Black Sabbath later released a song inspired by this story.

In the Lovecraft story, Joe Slater, an ignorant, backwoods resident of a sanitarium, wakes up from sleeping speaking of madness-inducing worlds. Employing the device pictured above, the narrator attaches himself to Slater when he goes into the dreamworld. Toward the end of the story, the narrator receives a message from a light being which explains.

“Joe Slater is dead,” came the soul-petrifying voice or agency from beyond the wall of sleep. My opened eyes sought the couch of pain in curious horror, but the blue eyes were still calmly gazing, and the countenance was still intelligently animated. “He is better dead, for he was unfit to bear the active intellect of cosmic entity. His gross body could not undergo the needed adjustments between ethereal life and planet life. He was too much of an animal, too little a man; yet it is through his deficiency that you have come to discover me, for the cosmic and planet souls rightly should never meet.

The light being explains when we sleep, we go to some unique places.

It is not permitted me to tell your waking earth-self of your real self, but we are all roamers of vast spaces and travellers in many ages. Next year I may be dwelling in the Egypt which you call ancient, or in the cruel empire of Tsan Chan which is to come three thousand years hence. You and I have drifted to the worlds that reel about the red Arcturus, and dwelt in the bodies of the insect-philosophers that crawl proudly over the fourth moon of Jupiter. How little does the earth-self know life and its extent! How little, indeed, ought it to know for its own tranquillity!

In the song “Behind the Wall of Sleep” by the Smithereens, the narrator dreams of a girl:

She had hair like Jeannie Shrimpton back in 1965
She had legs that never ended
I was halfway paralyzed
She was tall and cool and pretty and she dressed as black as coal
If she asked me to I’d murder, I would gladly lose my soul.

The narrator dreams of her because he’s one of many who’d like to be her “friend.” He doesn’t know how to tell her that he’s not like the other guys.

But is he really not like all of the rest of the guys? He’s not direct, for one thing, and that’s true of most men/boys. He’d like to have a romantic/sexual relationship with her. Although it might be intimidating, it’s better to be more direct, to say something like, “Look, I’d like to get to know you. I’m in the market for a girlfriend.”

He was halfway paralyzed, that he’d have murdered for her, and was willing to lose his soul, well that’s not much of a challenge for her, is it? What, exactly, is interesting about him?

While there might be wisdom and new, exciting experiences behind the wall of sleep, it matters a whole lot what you do with the experiential opportunity.

What kind of life-changing experience have you had behind the wall of sleep? Has it inspired your art, whatever form that art takes?

The DRS uses affiliate links in blog posts. What this means is that if you click on a link and make a purchase we receive a small commission. This arrangement has no influence on our opinions.