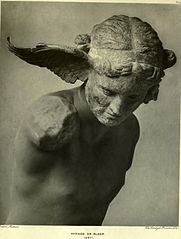 Ancient Greeks had a mixed relationship with sleep. The stigma didn’t start with us. It might not have begun with them.

It probably started with the first men and women, maybe Adam and Eve or whoever.

Either way, Hesiod and other ancient Greek writers had a choice. They could have made the god of sleep part of a family of positive deities.

Instead, the family consists of a bunch of negative representations and personifications.

Hypnos was the half-brother to Thantos, the god of death. The twins are the sons of night and darkness (Nyx and Erebus). Their grandfather is Chaos. His other brother is Aether, the personification of the better air the gods get to breathe. His sister is the goddess of the day, Hemera.

Hemera sounds like a positive person to have as a sister. The daytime! Birds are chirping, the sun is shining, and you can see what you’re doing without a torch.  Aether sounds like a good guy too. If these siblings and what they represented were products in a modern-day market, a lot of people would want to buy them for themselves.

However, if Hypnos’s other half-brothers and sisters were products in a market, nobody would want to buy them unless it was to inflict them upon their enemies.

The family includes the personification of impending doom, some female death spirits who represented violent death on the battlefield, the god of blame and mockery, the goddess of pain, and other figures who represented old age and strife.

Do you see a thought pattern here? A stigma, perhaps? I don’t think it can really be any clearer.

The ancient Greeks could have made Hypnos the brother of health, clear thinking, and refreshment. They didn’t.

They might be part of the reason modern man struggles with sleep skills. Greek thought influenced our ancestors who definitely influence us.

Much of what we do know of the ancient Greek gods comes from Hesiod’s Theogony. Hypnos also appears in the Illiad by Homer. The Theogony is a poem describing the histories and genealogies of the gods. It’s like the first issue of a comic book, the origin story. However, instead of one hero in a comic book universe, it’s the entire universe’s origin story.

Hesiod lived around 700 B.C.E. In addition to writing on mythology, he also wrote on farming techniques, astronomy, and economics. He seems like a serious, scholarly fellow. He was against laziness. He wrote about how work was the source of what was good in society. He compared lazy people to drones in a beehive.

Why? In a beehive, drones gather no pollen for honey. They live off of the work of others. Their only function is to mate with the queen bee. To many, that doesn’t sound like a bad life. However, if everybody lived like that, Hesiod’s point is that you wouldn’t have much of a society. Nothing would get done. Somebody has to do the work. Others added to Hesiod’s works, putting their thoughts right in the text, far more intrusive than any modern editor.

It’s hard to know what were entirely Hesiod’s thoughts and what were others. In addition, it’s apparent he borrowed myth stories from other middle eastern civilizations. This negative opinion of sleep wasn’t just his belief; it was other writers. It belonged to other scholars; indeed, the whole civilization, the whole time period.

We can’t pin this all on Hesiod! It didn’t start with him. It certainly didn’t end with him. We’ve thrown off many ideas of the ancients with modern advancement. Slavery is one of those that has gone largely away. The physical kind exists only in a few places today, like Mauritius, where it’s traditional. Even in Mauritius, however, it’s been a criminal offense since 2007.

Indeed, in western society, we only have people in extreme debt. That’s actually a lot more convenient and easy for the “master” or “debtholder.” It’s not slavery, per se. A modern-day Hesiod might call it the half-brother or half-sister. These negative connotations could be and should be another one to go. Make Hypnos, in your mind, half-brother to healing, creativity, recuperation, and personal success! If you do, you’ll be on the way to having some incredible sleep skills. You might even become a super sleeper.

This webpage includes affiliate links for which we receive a commission.