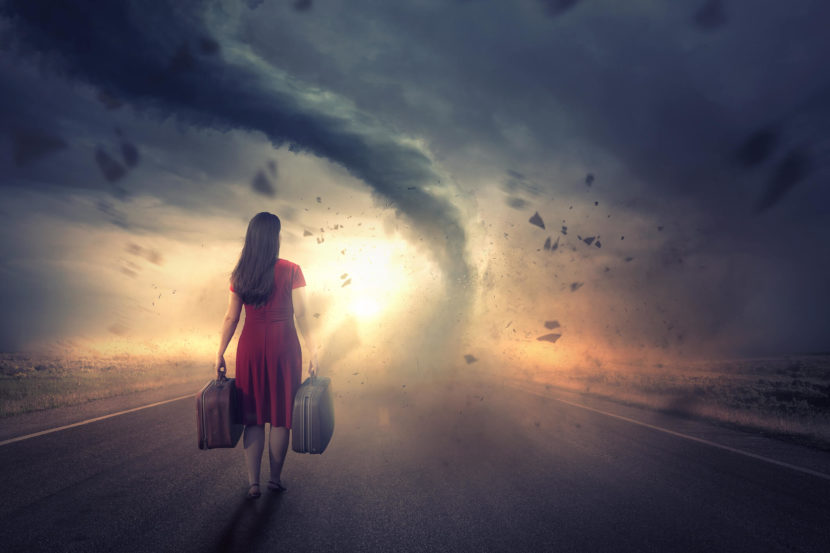 And what about dreams of other kinds of storms?

Even if they’re anxiety-provoking, the sirens in tornado early warning systems are a blessing. Before such systems with their air raid sirens were developed, many more people were killed by tornadoes.

A dream about a tornado can also often be compared to an early warning siren, especially if the dream is seemingly unbidden.

The feared damage is symbolic, either physical, emotional or spiritual.

When most people have dreams like this, they’re emotional about the portending loss, too—if only deep down.

In real life, tornadoes can take off a few shingles from the roof of one house. Then, a couple of houses over, the tornado will destroy the entire place. They’re unpredictable.

They’re usually like that in dreams too. The tornado in your dream is usually representative of a figurative storm building in your life. Subconsciously you may feel coming events are going to be unpredictable, that there’s a feeling of dread. It’s indicative of your emotions about such matters.

Lizzie Cornwall, writing in Dreams Interpreted, suggests tornadoes represent emotional outbursts or anger. The tornado could be a metaphor for destructive habits in yourself or others.

What to do if you dream of a tornado(s)

Take stock of the events that have you worried as calmly as possible. Some of us have a disconnect between our subconscious and conscious mind, so it might take a little soul searching.

Next, try to “save” whatever is threatened and that you find valuable. You might feel overwhelmed and despondent that you’ve not be able to save everything. Do your best. Then as if it were a real tornado, seek shelter as best as possible.

As noted above, real-life tornadoes are often unpredictable, and so are these figurative tornadoes. It’s important to stay calm and to keep a level head.

It’s something like what you’d do if confronted by a real-life tornado.

You and your family or friends seek shelter—if it’s available.

Then you take cover somewhere—under a table, in a room at the center of the building, in a tornado shelter.

If there’s no shelter to be had, you and everyone else might lie down in a ditch.

With your face down, you hear a loud whooshing sound. The sound has been compared to a train or a jet plane, but really there’s no comparison.

After the tornado passes, you crawl out of where you’ve been hiding. How bad was it? What’s left?

If the storm hasn’t happened yet, batten down the hatches!

Sometimes the dream image is a replay of a story you’ve seen on the news or in a movie.

If you’ve seen a tornado in real life, it could be a replay of the images of the day, especially if you worried that the storm would touchdown and harm you.

Hurricanes in dreams are similar to dreams about tornadoes, except for the fact that hurricanes take place over water. This fact is going to play a role. The meaning of the dream for you will be dependent on how you feel about the water and what it represents to you.

Dreams featuring gathering dark clouds, as you might see before a storm, are also similar to dreams about tornadoes. Your subconscious is choosing to express its sense of foreboding with different imagery.

Storm/Tornado/Hurricane dreams are not always prophetic

We should note here that these kinds of dreams would not necessarily be prophetic.

Some say they are, but it’s more prophetic in the sense that a car’s warning light is prophetic when you’re low on fuel. If you get some gas, you’re not going to run out. Blow the warning light off, and you could.

If you’ve made mistakes, this kind of dream can come up to warn you that there are going to be consequences.

Forgot to pay your bills? You’re in a world of trouble as you get late fees, service disruptions, and the hassle of straightening things out with your creditors. The storm dream is your subconscious’s way of saying, “Look out!”

Forgot to do something that you promised a friend or loved one? The storm dream is a way of showing you that there might be trouble coming up with them. Do what you can to mitigate the damage.

As such, these kinds of dreams are some of the most useful dreams you can have.

People who live in tornado alley are probably the most likely to have a dream about a tornado.

The Museum of the Great Plains in Lawton, OK has an exhibit where you feel what it’s like to live through a tornado.

(see “Slice of Life Dream” for above).

Take your life’s temperature with your dream journal.

Dreams can show you a single point of failure.

How to unlock health warnings in your dreams.

We use affiliate links. If you click on a link and make a purchase, we may receive a small commission.