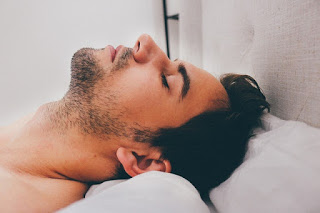 When we were leaving Sunday afternoon, your wife was all smiles as you backed the car out of your driveway. She looks really happy, I thought.

I didn’t think much about it at the time. I have figured out why now. She was looking forward to a full night of sleep! The poor woman hasn’t gotten any sleep for weeks and months, maybe years. How does she cope? Earplugs? A white noise machine? What?

Now that I’ve spent a night in the same room sleeping with you, I realize something heavy: you’re lucky she hasn’t killed you for your snoring. Really. People have been killed for less.

That she’s still with you means she must really love you. Hell, I like you too. You’re a good guy. I hope you take all this the right way.

Do you remember those old Loony Tunes cartoons with the snoring wolf? Or the one with Bugs Bunny and Daffy Duck? Do you remember how the wolf would snore so loudly that his blanket and roof would raise right off of him?

That’s what I was picturing last night as I was listening to you snore away. It takes a little humor to make it through tough times, tough nights.

Really, though, it’s not a laughing matter.

I wish the company had paid for two rooms. Even if it had, and the clerk gave me the room next to yours, it might still not have been far enough away. Really.

With your loud snoring, the guy next door woke up, went outside, and started revving his motorcycle at 3 a.m. By the time I went outside to talk to him about it, he’d been running and revving that engine for 30 minutes. He dozed off on his motorcycle rather than listen to you through the walls, I’m sure.

Very politely, I asked him to knock it off.

He laughed at me in a curt way. “Make me,” he said, following that with an obscenity.

Episodes of those TV shows that they make about the inside of prisons flashed in front of my eyes. I wanted to kill him, but I didn’t want to live out a real-life prison show.

The truth is that your snoring was pissing everyone off.

I tried to keep it together. I bet your wife is trying to keep it together too every day. She’s some kind of a saint. That’s all I can say. Either that, or she’s deaf and lip-reads extremely well. Maybe she has a very good set of earplugs. Your snores would probably pierce earplugs of more normal quality.

The guy with the motorcycle drove off a few minutes later. I bet he didn’t have earplugs either. I honestly hope he didn’t fall asleep when he was driving and crash somewhere.

Snoring leads to no sleep or at least a lack of sleep. The snorer misses sleep as well as the others who sleep nearby.

How I wish I had thought to bring a set of good earplugs! Having the right tools helps the completion of any job. Having the right sleep tools is a sleep skill. Those soft plastic ones with the installer that you get on the gun range would have been ideal!

Do something about your snoring

Try sleeping on your side. That helped some, though not completely. Every so often, I’d prod you with a shoe to the shoulder to turn over, but it didn’t do any good for long. You’d always turn back to your back and snore away.

Maybe you could prop yourself against a few pillows and have some better, long-lasting results.

You could lose some weight. They say that the closer you are to your ideal body weight, the less likely it will be that you snore. Of course, it’s not easy to lose weight, and it always takes some time, but it’s not impossible either. A few pounds might make a huge difference.

Do you have allergies? Get them treated.

Try taking some Benadryl before you go to bed. Take the standard amount, whatever it says to take on the bottle.

You could also try one of those breathing strips too. I know they look stupid and seem pretty uncomfortable but you’ve got to do something.

Maybe give up smoking! They say smoking makes people snore.

Prop up the head of your bed with a same-sized object on both sides. A few inches on either side might make a big difference.

There are exercises to stop snoring. Those actually sound pretty simple. They only take, like five minutes each day and you’re supposed to see improvements quickly. You could try those.

Exercises are a smart treatment for a lot of things beside snoring, like blood pressure.

Whatever you decide, you’ve got to do something about this problem. I know you don’t hear it but you need to. You’re not the one who has to listen to it all night. You’re sleeping after all.

If you want to get rid of the snoring immediately, check out this mouthpiece from VitalSleep.

The Only Snoring Solution With The Custom Accu-Adjust System! Try VitalSleep Now!

If you snore less, you’re going to wake up refreshed. That feeling is priceless. When you wake up that way, it improves your life all around.

I say this as a friend and coworker. I know our medical insurance leaves something to be desired. I know there’s a helluva copay. I know there’s a lot of things that you’d rather spend the money on, but ignoring this could be even more expensive in the end. You could end up getting a divorce for this.

Good luck. Tonight they’re putting me in a room on the other side of the complex.

It’s all right. I’m planning to turn in early. 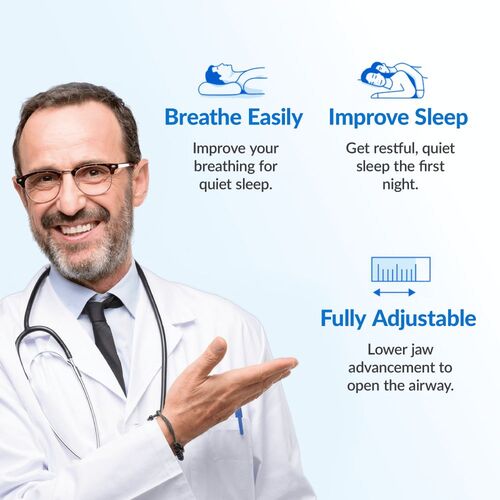 This article includes affiliate links for which we receive a small amount of compensation if a purchase is made.