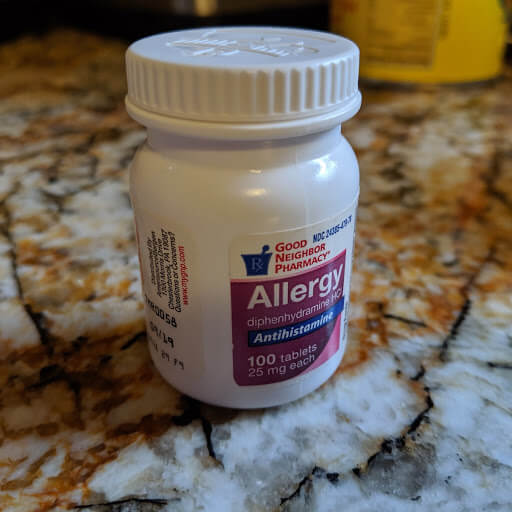 The usual way of ensuring you get a good night’s rest should be to be active during the day, get some exposure to the sun, avoid drinking too much coffee too close to bedtime, and to be relaxed. That’s what the best sleepers do.

Unfortunately, sometimes life interferes with the usual way of falling asleep. One or all of those things that help people fall asleep don’t happen.

When they don’t, it makes sense to use something to help you get some sleep. Sleeplessness can be a direct threat to your long-term health and safety.

One of the common things people take is an over-the-counter antihistamine called diphenhydramine. One of the brand names it goes by is Benadryl. Listed as diphenhydramine, it’s also found in the “PM”, “nighttime” or “nighttime cold” formulations of other combination medicines.

Despite that, its well-documented sleepiness effect is what’s known as an “off label” usage. When undergoing testing, diphenhydramine was never tested specifically for its effect as a sleep aid. Its primary usage is as allergy medicine. The sleepiness is a side effect. Side effects don’t happen consistently. The 2015 literature review found its efficacy as a sleep aid to be questionable at best.

Despite all this, diphenhydramine is commonly found in skilled nursing facilities, provided as a sleep aid.

If you’re one of those people who swears diphenhydramine doesn’t work for you as a sleep aid, you’re not alone.

Interestingly, diphenhydramine is sometimes combined with melatonin and specifically marketed as a sleep aid. ZzzQuil has this formulation. It works well enough to be marketed this way, though melatonin isn’t considered a sleeping pill either. It’s a hormone replacement.

In doses that are too high, the medication has a paradoxical effect.  Too much diphenhydramine is anything but restful. Some people who have tried to kill themselves by taking too much of the stuff. They thought they’d drift off to sleep and die. Instead, they started feeling incredibly tense and agitated as their body metabolized the substance. They felt terrible as they became even more mentally unhinged.

While many factors can go into the actual effect of a given medication and dosage, too much diphenhydramine definitely has the opposite effect of aiding one in going to sleep.

The Correct Dosage of Diphenhydramine For Sleep

The correct dosage for sleep is 25-50 mg. Always use as directed on the particular package for the most accurate information pertaining to your situation.

How Does Diphenhydramine Cause You To Sleep?

Diphenhydramine is a drug that’s classified as an antihistamine. That means the drug works to counteract histamine.   Histamine is a compound that’s produced by your body. It’s found in most living creatures.

In the body, the compound has several different roles. One role is to aid your body’s defense force in attacking invaders. Histamine helps white blood cells access the damaged tissue. As a process, this is known as inflammation. Histamine also acts as a messenger, allowing the body to send signals from one cell to another.

Use It Sparingly To Aid With Sleep

It’s not a good idea to use this medication every night help you go to sleep. It’s an important medication in that it’s common to use to treat allergies and side effects of other medications.

With too much regular usage, your body gets used to it. Histamine doesn’t suppress when you want it to. If you’re having a life-threatening allergic reaction, you want diphenhydramine to work as well as it can. If you’re regularly bothered by itching or allergic reactions at night, try to sort the cause of those out.

Medication should be a stop-gap measure. In addition, the effects of this over-the-counter medication persist for a relatively long time. It doesn’t clear your system very rapidly. You can find yourself too sleepy when you don’t want to be sleepy. You’ll turn to stimulants and then a vicious cycle ensues.

It’s far better to try some alternatives to diphenhydramine for sleep first like improved bedtime rituals, earplugs, relaxation techniques like meditation beads, or lavender oil. In certain cases, cutting down on coffee and caffeine can help.

Some of the links in this post are affiliate links. This means that if you click on the link and purchase the item, the DRS receives a small commission at no extra cost to you. All opinions remain independent.