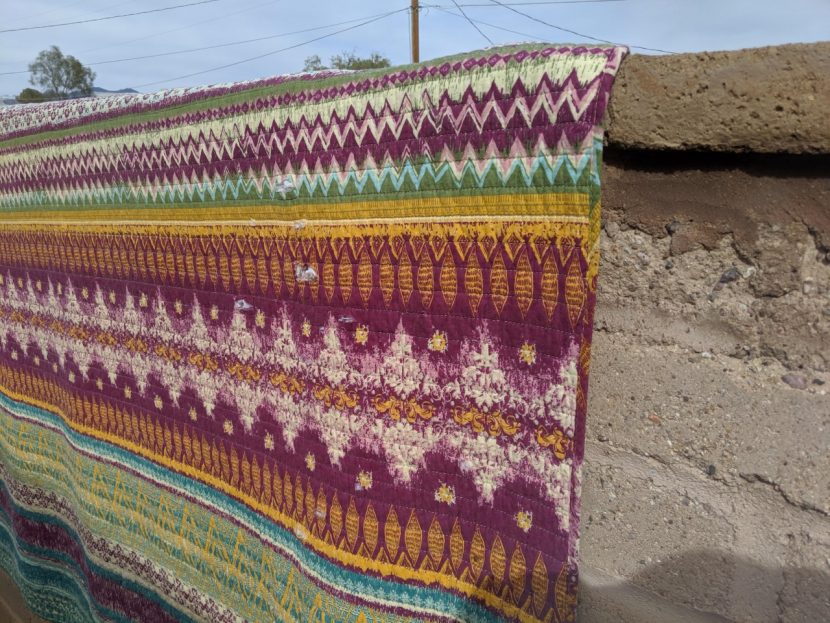 Heck yes! You CAN Sanitize With Sunshine.

Some people don’t have a bedroom so much as they have a lair where sunlight is never allowed.

It’s true. They’ve got a place where they crash at night that’s positively subterranean. During the day, they keep the blinds closed, the drapes drawn, and the window shut.

The room becomes progressively more unhealthy, especially if you add moisture to the mix. The place gets stale first, then musty.

Keeping the blinds closed isn’t good for your health.

Unless you’re a real vampire, then it doesn’t matter. Vampires are already dead. They have no worries other than wooden stakes and garlic.

People who act like vampires, also known as night-shift workers, don’t count. They’re not dead, though some of them feel like it until they get their first cup of coffee or energy drink.

The bedrooms pictured in magazines, catalogs, and websites are the opposite of these places. In those photos, bedrooms are light, airy places. The rooms look comfortable. Those bedrooms would be delightful to sleep in. They’d be a joy to wake up in.

In the magazines and catalogs, the focus is on the furnishings, the pillows, and comforters.

Behind the scenes, unnoticed though it’s all around, however, is a powerful force called “the best disinfectant.”

That may or may not be accurate.

Still, even if it isn’t the best disinfectant, it’s a damn good one. You should appreciate its power.

It’s not going to replace a good cleaner, not a good human cleaner nor an excellent liquid cleaner. When we’re talking about bedrooms, avoiding things like the flu and the coronavirus and other bad stuff, something doesn’t have to be “the best” to be damn good.

In military terminology, when it comes to cleaning, sunlight is a force multiplier. If you’re at war with viruses and harmful bacteria, sunshine will make your cleaning campaign more effective. That’s true whether you’re talking about the coronavirus, influenza, or some other malady.

Some people are under the impression that you can shine UV light on the skin to kill the coronavirus.  They don’t have a basic understanding of microbiology. Ultraviolet light is useful for diminishing the virility of the virus, not for killing it in someone. That makes no sense.

Where the quote “sunlight is the best disinfectant” comes from

Louis Brandeis wasn’t a medical expert. He was, however, a lawyer and justice on the United States Supreme Court from 1916 until 1939.

Brandeis wasn’t talking about avoiding the flu, cleaning pillows, cleaning blankets, cleaning face masks, or sleeping well. He was more known for his work against monopolies, big corporations, and consumerism. He was referring to stopping corruption.

When you’re talking about what Brandeis was talking about, and speaking figuratively, sunlight is the best disinfectant. Corruption flourishes in anonymity.

It’s underused, too, in both sets of things these days, especially when you’re talking about big corporations and the habits of consumerism.

This isn’t a blog about big corporations and consumerism. It’s about sleep and health.

When you’re talking about surviving and prospering during pandemics, it’s a good idea to be hip to every trick there is.

Disinfection, or antisepsis by sunlight, is an excellent method to know.

Disinfecting with sunlight is an old method

There’s nothing new or innovative about killing germs with sunlight. We just don’t think about it much these days in the United States because we live in a consumer-driven culture. When you lay an item out in the sun, nobody is making any profit off of you cleaning it. Sunlight disinfection isn’t publicized in consumer-based countries. Yet water, clothing, and other items are disinfected with sunlight all of the time in other countries.

Their practice of wearing facemasks everywhere, too, may have helped. While they don’t block the virus, they do stop people from touching their faces as much.

To be sure, however, such a hypothesis needs to be studied.

Brandeis’ quote comes from a well-regarded book from 1888 by James Bryce, The American Commonwealth. Bryce was comparing honest dealing among politicians to the ability of the public to know about public affairs.

“Public opinion is a sort of atmosphere, fresh, keen, and full of sunlight, like that of the American cities, and this sunlight kills many of those noxious germs which are hatched where those politicians congregate,” Bryce wrote.

Brandeis captured the sentiment of this passage succinctly: “Sunlight is the best disinfectant.”

The analogy was apt. This was in the same time Robert Koch and Louis Pasteur were coming up with a lot of work that led up to the Germ Theory. These men demonstrated specific microorganisms caused specific diseases and changed the world. When Bryce was writing about politicians, especially in places like Tammany Hall, the analogy seemed apt.

So when you think about vice, corruption, and graft – what stops or lessens it? Figurative sunlight, everyone knowing all about the fraud.

What stops the proliferation of actual dangerous microbes?

Modern studies on disinfecting with sunlight

Sunlight is made up of light at different wavelengths. The part of sunlight that disinfects is the light in the ultraviolet spectrum. If your windows have an ultraviolet blocking film, also known as UV blocking, sunlight will do very little when it comes to disinfecting.

That’s because ultraviolet light is the key, what’s known as the active ingredient. Whether it’s artificial or natural, that’s the part that inactivates microorganisms. The beams beat down upon them. They scramble their proteins, DNA and RNA. When you think of what it does to microbes, it’s a wonder it’s not called “ultraviolent light.”

You don’t see the carnage, usually. Not unless you have access to an electron microscope.

In a 2014 study, socks contaminated with foot funk, also known as tinea pedis, were left exposed to the sun for up to three days. Israeli medical researchers concluded sunshine was effective in lowering the levels of contamination.

How to disinfect a bedroom with sunlight

An army couldn’t fight an entire war with just one of its branches.

The tanks of the armored corps can’t do all the fighting. You need infantry, all the support branches, the navy, the air force, and the rest too.

You need more than sunshine to clean, too.

Do you have a roof that can come off, a wall that folds down? Can you let the sunshine in, in that way?

I didn’t think so.

Even if you did, you’d still need to physically remove visible contamination.

Take the objects that need disinfection outside. If you have a wall or clothesline, items can be laid on them. Putting them on the ground would only make them dirty. If you have allergies, try to pick a place that will be blocked from a lot of wind or a season that won’t have many of your allergens blowing about.

Hang it out in the morning so that it has time to be outside for several hours. Approximately midday, turn the items over. Let it out there longer.

Tenia pedis is a chronic fungal infection that can be hard to get rid of. The study had them out there for up to three days. Their study showed a gradual decline in the microorganism. Longer is better, but there may be a practical limit to how long you can keep something outside.

This method is simple and can be used to clean pillows, to clean blankets, to disinfect personal protective equipment like face masks, and your bedroom.

While the ultraviolet light scrambles the viruses, bacteria, fungi, or protozoa, you can sweep. You can clean the surfaces with either your favorite commercial cleaner or maybe a 50/50 solution of vinegar and water.

Knowing about and using this force multiplier is especially handy during a pandemic.