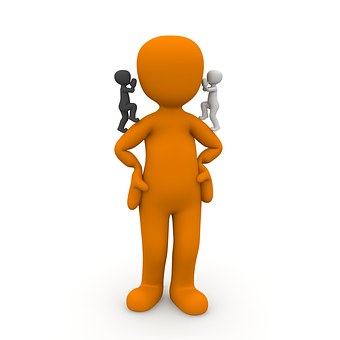 If you hear voices and nobody’s there, is it a problem?

This situation is nuanced.

From time to time throughout the day, Mark feels a little man sitting on his shoulder. The young man quickly turns his head to catch a glimpse of him, never quite managing it. Mark thinks he sees the man’s foot disappearing out of the corner of his eye as the man zips out of the range of his vision every time Mark spins to look. Mark never gets a good look, so he can’t be sure. That little man is quick.

The invisible man whispers into Mark’s ear. He provides a commentary of everything Mark looks at.

When the man takes a break from saying something nasty about other people, he has advice for Mark. You should kill yourself, the invisible man suggests. The world would be better off without you. You’re a piece of shit.

The little man continues his badgering, over and over again, day after day.

The only way I’ll stop is if you kill yourself, the little invisible man says.

Today Jeff was fired from his job at the car dealership. He’s lying on his bed with a bottle of vodka in his hand. From time to time, he takes a swig of the clear alcohol. It goes down harshly, not at all smoothly. He doesn’t like it, but he keeps drinking because it numbs the pain of being fired.

Okay, he admits to himself, I wasn’t cut out for selling cars. It wasn’t for me.

Jeff realizes he enjoys looking at cars and enjoys driving them, but not so much when it comes to selling them. Customers frustrated him. They asked a lot of dumb questions.

It probably was my attitude, Jeff admits.

The dealership wanted results. I wasn’t getting them.

The truth had been coming clear for a while. The sign his job was in jeopardy was right in front of him.

The dealership ranked all of the salespeople and posted it as a notice in the staff breakroom. Jeff had been ranked right at the bottom for the last three months. That made him feel desperate. Customers — and the rest of the sales staff — sensed it.

He had a mortgage and a car payment to pay. While he could see them back at the restaurant about getting his old job back, that would still make it tight going.

It’s going to be all right.

The voice and feeling come out of nowhere, soothing him. Jeff feels like he’s being hugged, comforted like he’s a child.

Auditory Hallucination Or Not?

In the above examples, both of these men heard voices. The field of psychiatry calls these voices auditory hallucinations. To both men, they don’t seem like hallucinations, a figment of their imaginations. The voices seem very real. In both cases, the sensation wasn’t limited to the verbal. Their other senses were engaged as well. That doesn’t always happen, however. Sometimes people hear voices and nothing else.

Mark heard a voice tormenting him, telling him to die. He felt pressure on his shoulder. This has the characteristic of bipolar disorder. This may be a mental illness.

On the other hand, Jeff heard a voice soothing him and felt an embrace. The voices didn’t belong to anyone or anything either man could see. Even so, Jeff’s experience wouldn’t be classified as a mental illness.

Why this is so is because of what illness is considered to be. A voice that builds you up and gives you strength is enriching. Conversely, one that impairs your ability to function makes you worse off.

Which voice was real? We really don’t know. Nobody can know for sure. Maybe one. Maybe both. Maybe neither. It wouldn’t be accurate to suggest that because the person can’t see the voice’s origin, that would preclude the voice from being real. Modern physics tells us there is much more to the world than what we can see with our eyes. Mystics and tradition tell us that there is a whole range of entities we can’t see: spirits, demons, angels, and so on. This fits in with the experiences of people worldwide. One in ten people hears voices.

It can be best to treat the voice as if it belongs to a being with a body.

You don’t simply do what a voice tells you to do if it’s not right. For example, shooting people sitting in parked cars who have done nothing to you as David Horowitz did because he heard voices isn’t right. Simple morality always applies.

People like him who give up control of their own actions give hearing voices in your head a bad name.

People like St. John of the Cross and St. Teresa of Avila heard voices. In and of itself, hearing voices isn’t a bad thing. On the contrary, it can be inspirational, a great source of wisdom, and interior strength.

You don’t simply obey the voice just because it has no body.

You are responsible for your own actions.

What to do if you hear voices?

These things can cause people to have hallucinations. If that’s the case, as the stress lessens or the psychoactive substance wears off, the voice may go away.

People have struggled to identify if a particular voice is spiritual or psychotic over time.

We should also consider that sometimes voices are neither positive nor negative. Sometimes they’re neutral. We, therefore, break down voices into spiritual, psychotic, and neutral.

These voices have a kind, gentle, and loving quality. There’s a profoundly wise character to them. They’re soothing, often use complete sentences whether the sentence is short or not.

These voices tend to be terse, involve the repetition of single words or short phrases. They’re extremely negative, hostile, or antagonistic. They issue commands combined with threats. Sometimes they involve two or more voices speaking about the individual in the third person.

The psychotic voices seem calculated to drive the individual to madness.

They aren’t particularly loving, wise, or profound. Neither are they menacing. They vary in character a lot. They don’t fill you with a light, loving feeling, nor do they fill you with dread.

The voice can seem like they’re trying to communicate with someone who will listen or who they’re able to talk with. They can be trying to give information. This place was ours! Help me! Unlike the spiritual voice or the psychotic voice, the neutral voice is more self-focused on their situation.

Disembodied voices, whether spiritual, psychotic, or neutral, can appear in dreams or while waking. Mediums often can see visuals that the entity wishes to show them.

It’s important to come to terms with these voices. While there is a stigma in our society associated with hearing voices, it’s important to realize that, over time, it’s a common experience for many people.

It’s less threatening if you determine the character of the voice. It’s also important not to blindly obey the voice. You are fully responsible for your actions at all times.

Realize, too, that some have reported the character of a voice changing over time. A voice can start as neutral or even loving. Later it devolves into a menacing evil. The character of the voice must be evaluated if the voice is telling you to do something wrong, as before, don’t do it simply because it’s disembodied.

If you feel like you can’t take hearing the voice or that you feel control of your actions slipping away, it’s important to seek help at an emergency department. It’s nothing to be ashamed of. It’s nothing that anyone in emergency services hasn’t heard of before. Overly negative disembodied voices have driven people to suicide before.

On the other hand, it’s perfectly fine to make peace with the voice if it’s neutral or spiritual. Many people have before. It can be a source of strength and or enlightenment an asset to you.

How Can You Stop Hearing Voices Naturally?

Allow yourself to experiment. It can be helpful to experiment to see what works for you and works to eliminate the particular voice.  No one solution will work perfectly for everyone. Everyone is different. Every situation is different.

This is the first line of defense against hearing voices. If you can keep busy, the voices may be crowded out in your mind. Going for a walk while you listen to music you enjoy can help. Doing a home improvement project or creating art can occupy your mind. Dusting, cleaning, sweeping can help. The goal is to replace the positive activity with the voices. Experiment to find out what works for you.

Ignore What They Tell You

If they’re not useful, ignore them just as you might ignore any other nuisance. Tell them, “I’m too busy to talk now.”

Alternately, engage the voices. If they’re nasty, tell them they have no right to talk to you like that. Tell them something like, “You get more flies with honey than you do with vinegar.” Put the voices in their place. Be assertive. Don’t do this in public, however, because that would create a scene.

Prayer can be very effective in crowding out voices. If you’ve tried prayer and it feels unnatural, and you’re not sure you’re doing it right, ask the advice of someone whom you feel respect for, someone who seems wise to you. It doesn’t have to be a minister, though a minister may have more complete, well-thought-out answers for you. Talking about prayer with someone else may feel awkward. It may feel superstitious. On the other hand, consider how lots of people have been praying for thousands of years. Based on that alone, there must be something to it, right? Many people affiliated with an organized faith — or even spiritual, not religious — would be pleased to give you their perspective once they understand you’re sincere. You don’t have to tell them about the voices either.

Sometimes things like prayer beads or devotional candles can help one focus when it comes to praying.

If a voice is whispering in one ear, put an earplug in it, maybe both if you can.

These substances make it hard to maintain control and can lead to an exacerbation of the voices. You want to strictly avoid drugs and alcohol. Another big reason to do so is that if you start taking medication to help manage the voices, alcohol and other drugs can interfere.

How Can You Help Someone Else Who’s Hearing Voices?

The most important thing is to engage in non-judgemental conversation. Please encourage them to avoid drugs and alcohol. Ask them if they’re suicidal. If they are, that’s a medical emergency, and they need to go to an emergency department that can provide them with around-the-clock medical care.

If they’re not suicidal, ask them what the voices are saying.

For many people, it can be very therapeutic to engage in non-judgemental conversation.

Taken together, these strategies can be very effective in helping you or someone else manage. If you try them and you don’t seem to be making any headway against the voices, strongly consider seeking direct medical help. Please share what you’ve done to try to control them. Some medications can help, though they aren’t without side effects.

This post contains affiliate links. If the link is clicked and a purchase is made, this website receives a small remuneration. Our opinions remain our own.