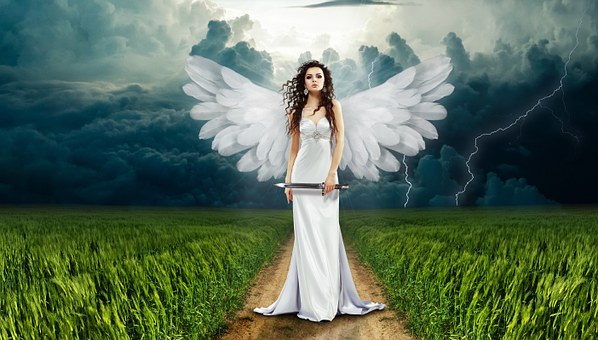 In the Bible, God communicated with people in dreams.

The angel Gabriel announced to the Virgin Mary that she would bear the Savior.

Another angel came to St. Joseph and told him of Herod’s plans to kill off the oldest son of every Jewish family.

There are many other instances in both the Old and New Testaments.

Artists have visualized these encounters in various ways. Mostly, though, they’re feelings you get, phrases that repeat themselves. Those sensations aren’t anything that can be visualized in a painting. Visual artists have got to use visuals.

Yes, God communicates in dreams; usually you won’t see an angel. You’ll get a feeling, some information you had no way of knowing, profound counsel that you wouldn’t have thought of yourself, maybe an example told in the form of a parable or example.

Dreams from God might take the shape of a warning about someone. You might have a dream where you’re praying for someone else (maybe that’s a hint that you should do that in your waking life). A wide variety of dreams are possible.

To discern the voice of God, it helps to be familiar with the Bible. It’s a good practice to read some of it every day anyway. A habit like that helps build familiarity. It helps to have a good translation that you’d enjoy reading. A priest, minister, faith-minded friend, or a Christian or religious bookstore can help you find a good Bible translation.

Jesus said that you’ll know who’s good and who’s evil by looking at their fruits, the results of their actions. Sometimes, however, when you get a dream that might be a communication from God, there are no fruits yet. In that case, familiarization with the Bible helps you know if the dream is from God.

If, for example, you have a dream commanding you to get revenge upon someone who’s done something terrible to you, you’ll know that doesn’t sound like God. After all, when asked how many times you should forgive someone who’s wronged you, Jesus said, “Seventy times seven.”

If the dream is more like, “I’ve got this. Don’t worry about this,” that dream might be from God.

Revenge belongs to God, Jesus said. The person who wronged you doesn’t necessarily get a pass. Rather, He’ll take care of the trouble.

How do you know if your dream is from God?

Mixing up messages from God happens over and over in the world, like when somebody puts on a vest laden with explosives and walks into a crowd of people, and detonates the vest. The crowd seemingly consists of a semi-random assortment of people, male and female, young and old. The Geneva Convention and the doctrine of Just War say it can’t. Yet the associates of the suicide bomber tell the world that it’s God who’s telling them to do that, that the war is somehow ‘holy.’ Is it?

What if there was a way to convince the group you were targeting your position’s truth? That would be infinitely more powerful. You also wouldn’t lose an ally, like you do when someone associated with your cause kills him or herself like you do when you have a suicide bomber. Suicide bombing, kamikaze bombing, and any similar attacks puts your cause on the losing side of the conflict equation. Suicide bombing diminishes both the “cause” and the opposition. If there ever was a tactic that was pure evil, that’s the one.

Any voice recommending that tactic isn’t from God.

In discerning, it’s best to focus on the expected results of the action. That’s where you can start to be more confident about whether something is of divine origin or not. That’s not to say there never will be a lack of clarity or competing goods. Philosophy is the study of resolving these questions. God is impressive, awesome, all good, and omnipotent. When you see the results of His or His minions’ counsel, you can come to appreciate this.

A good symbolic analogy for discussing dreams is the moon. The moon is visible at night, and dreams, too, are visible at night. Most people sleep at night. What causes moonlight? Science tells us that it’s light from the sun shining upon it.

The “light” from your day-to-day life shines upon your subconscious. What does the “light” shining upon your subconscious consist of? Your hopes, goals, aspirations, activities, and so forth. Sometimes, though, there are inputs that don’t seem to come from your own mind, your personality, or your day-to-day experiences. Some insights and emotions are beyond you and your capacities. The information is beyond your experience. The lovingness is way more loving than you could ever be. There is an amount of peace you don’t have. They contain an instruction, a request.

These are the kinds of visions and dream input people talk about when they talk about God talking to them in dreams. Per inductive reasoning, there is a good chance this is from some point beyond your mind.

You know yourself. You know your personality, your preferences, your proclivities, your thoughts, and the rest. In many cases, you can figure out this not of you. Your subconscious can sum up information. It can put pieces of something that’s been puzzling you. Tapping into it can give you laser-piercing insight. Usually, there’s nothing particularly miraculous about that. But the feeling from one of these experiences is akin to reading a summary of something versus having your mind and emotions blown.

A person knows when they’ve reached a conclusion step-by-step and when they’ve just had their paradigm altered. Then, when the advice is in line with goodness and justice, there’s a good chance that it’s coming from God or one of His assistants.

It’s only right, then, to give credit where credit is due. Deductive reasoning proceeds orderly, using equivalency. Inductive reasoning is about probability. When you can feel 95 percent confident about something, you can afford to be confident.

Many people don’t like to think for themselves. In fact, religious people get accused of this, and atheists get critiqued by religious people for sloppy reasoning. The more comfortable you are with doing the work of thinking, the more likely you will arrive at a sound conclusion. Laziness is one of the factors that go into errant reasoning.

Know yourself and your abilities

If you know you’re prone to hallucinations and misconceptions or have frequent problems along that line, you can’t be as confident that what you’re perceiving is actually true. As a result, you’re not a reliable witness.

If you know you’ve been prone to exaggerating your feelings, stop. While the truth isn’t always so dramatic, and it can be hard to interest people in a true story instead of one that’s been exaggerated, the truth is more powerful. Stop exaggerating.

Pay attention to patterns in your dreams

After you’ve kept a dream journal for a while, you might notice certain patterns or a streak of a certain type of dreams. Sometimes you might have a streak of mundane dreams. They’ll be dreams where you’re doing a day-to-day activity. You might be in a meeting. Maybe you’re cleaning a shed, a dog, or your kitchen. Maybe you’ll be cooking dinner. These are common.

Sometimes they’ll be like episodes of a TV show.

Dreams are usually preoccupied with what’s going on in your life now, Ann Faraday writes in The Dream Game. If mundane dreams were the only kind of dream people had, it would be hard to say dream journaling was very worthwhile. So after a certain cycle of these dreams, you might see a cycle of heavy symbol-laden dreams. In these dreams, it can seem your subconscious is trying to communicate some important truths about your life to you. Looking for these patterns can give you further confidence that what you’ve experienced is from a superconscious input.

We could easily go on and on listing the influences upon you. There’s no shortage. You bring these influences with you into a personal environment or sphere of control: your world. Other factors influence this world, and you, in turn, influence these other factors.

The power of dreams comes down to your ability to affect this circle of influence. If you find a crystal clear voice of goodness and reason among all of those influences and voices, you should follow it. It’s meant to help you. If you do so with your eyes wide open and focusing on the long-term good and benefit to the people and things you most care for, that’s for the best. Wisdom is a good thing. It’s easy to give up our freedom of choice and abdicate responsibility. It’s also foolish and shortsighted. By running these ideas through your decision-making process, you can help advance the well-being of humanity in the ways you most care about, meeting your mission. It’s simply wise to use good counsel and positive influences to help you meet challenges along the way.

That’s the best way to know if your dream is from God.

Christianity isn’t the only faith that pays attention to dreams: The Principles of Islamic Dream Interpretation.