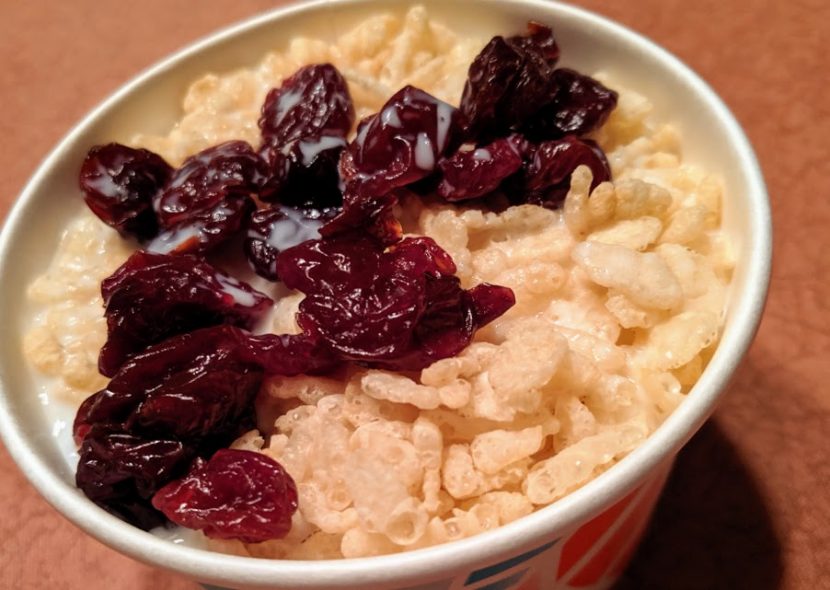 Crisp rice cereal combined with dried cherries makes for a naturally sedating combination that can help you get some shuteye.

You can call this midnight snack insomnia “cereal cure.”

As they say in clickbait hype, “Drug companies probably would rather you not know about this!!!”

Seriously though, when eaten in moderation, the rice cereal provides a satiating, somewhat slow-burning fuel.

The dried cherries are a natural source of melatonin.

The milk finishes off the combination by introducing some essential vitamins and minerals.

Altogether, the combination is cool and comforting.

It works with a variety of different milk types.

Walnuts, if you have any on hand, are a great addition to this midnight snack concoction. Walnuts have plenty of tryptophan, a sleep-inducing amino acid. You usually hear about tryptophan when it comes to the Thanksgiving turkey, but walnuts have it too.

The nice thing is that this cereal cure is a lot tastier than a handful of sleep supplements and sleeping pills.

For best results, avoid having too much sugar during the rest of the day.

Try the “cereal cure” as a midnight snack on the nights when you don’t feel like trail mix.

Sometimes, too, when it comes to seeking out a particular midnight snack to use food as medicine, it’s not so much what you eat, but, rather, what you don’t eat. If you’re typically eating the equivalent of a cup or more of refined sugar every day, you’ll want to cut back on that.

Too much food is a problem. It can lead to acid reflux which can cause you to cough and gag and snap you right out of your dreams.

Taking in too much caffeine can cause problems at bedtime too.

What makes this a great insomnia-fighting midnight snack?

What other cereal provides a novel crackling soundtrack?

Eaten in moderation, it might very well provide the soundtrack for pleasant dreams.

Kellogg’s had a decades-long advertising campaign highlighting the snap, crackle, and pop that could be heard when you poured milk over the cereal.

That’s probably the only time in the history of animation that cartoon characters were created based on sounds.

The sounds have nothing to do with the cereal’s sleep-enhancing effects, however.

It’s the fact that, right along with other high-glycemic cereals, crisp rice provides slower-burning fuel for the body that can limit waking up hungry.

However, you’ll want to avoid other crisp-rice creations, namely the ones that add a lot of refined sugar.

Rice Krispie Treats, for example, are made with marshmallows. Marshmallows are made out of simple sugars. This readily causes energy to spike and bottom out. Glucose can be compared to kindling wood which burns and fades. That’s fine sometimes, but you need longer-burning fuel to have a better, long-lasting campfire.

Putting it plainly, too much sugar will mess your sleep up.

The reason for this is due to the effect sugar has on orexin. The orexin cells produce a neuropeptide that is called, amazingly enough, orexin. Neuropeptides are chemical messengers. The messages they help to transmit tell the body how to behave. Refined sugars mix up this messaging.

Milk, crisp rice cereal, and dried cherries may be the most powerful sleep combination known to cereal eaters everywhere.

Add a handful of walnuts in. Look out. Dreamsville, here we come!

For example, adding a sliced banana to a cereal bowl can be an addition to aid sleep for some people. Bananas are high in potassium and magnesium, providing a component missing in many diets.

However, a person whose diet is generally healthy may not experience a drastic improvement in sleep the way someone else would.

If the insomnia problem is that you’ve already ate too much too close to bedtime, you’ll need to give your stomach time to process it.