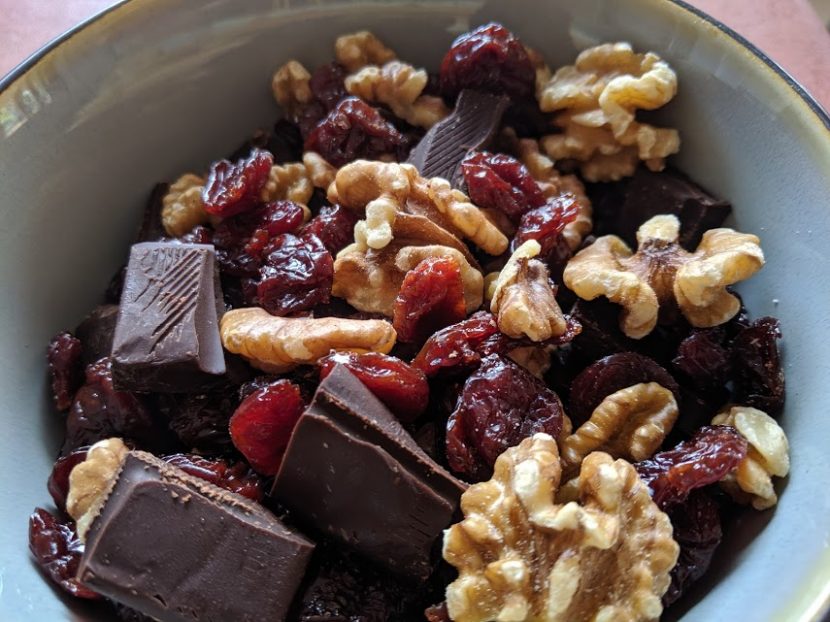 Some supermarkets have dozens of varieties of trail mix these days.

It wasn’t always this way. The creation of and access to all these concoctions is a relatively recent innovation, at least compared to how long people have been eating it.

Hikers used to call it “gorp.” The acronym stood for “Good Old Raisins and Peanuts.”

I was introduced to it in the Boy Scouts by the assistant scoutmaster in my troop in the late 70s. He didn’t say anything about adding chocolate. He probably thought we all ate too much candy.  Of course, a kid in my patrol had the idea to add M&Ms to his batch. Chocolate is a good friend of peanuts and raisins.

Today, there are all kinds of mixes available. You never really hear it called “gorp” anymore. Backpacking and hiking food is a whole lot more complicated than “good old raisins and peanuts.”

As a trail mix connoisseur, I can assure you some commercially-prepared mixes are very good. Some others are terrible. Some are strange. The variety ensures there is a mix for everyone.

Hiking snacks have been around for as long as people have been going for a walk in the woods. It was probably the second thing invented, right after the canteen. Early mixes made by Native Americans included buffalo meat.

Gorp consumption became more common after being mentioned in a bestselling camping and woodcraft how-to book by Horace Kephart. Initially released in 1906, Camping and Woodcraft: A Handbook for Vacation Travelers and for Travelers In the Wilderness influenced much of the way outdoor novices and enthusiasts experienced the wilderness. An expanded two-volume edition appeared in 1916. Over time, Kephart’s tome became one of the top-selling outdoor sports books of all time.

A handful each of shelled nuts and raisins and a cake of sweet chocolate will carry a man far on the trail, or when he has lost it. – Horace Kephart, naturalist, outdoorsman, writer

There are all kinds of pearls of know-how and wisdom in Kephart’s book. The woodsman was also notable for his advocacy for the establishment of Great Smoky Mountain National Park in North Carolina, that great eastern refuge from light pollution.

In a couple of throwaway lines in his book, he lays down the basis of a good portion of the healthy snack market, a segment of the food industry worth more than $23 billion in 2018.

Gorp (or trail mix) is filling. It doesn’t make a mess. It’s easy to eat. It is the perfect food convenience food for hiking.

It’s gone far beyond the trails.

By the 1990s, the packaged food industry seized upon the concept. When you go to Target these days, they seem to have dozens of types of trail mix available, all under the Archer Farms label. If you’re a trail mix fan who doesn’t make his or her own, that’s the place you want to go.

Gorp can be made a healthy snack that helps you stave off hunger.

It can also provide you with empty calories that aren’t going to do you any good.

While it’s easy to put a bag of trail mix in your shopping cart, it’s almost effortless to make your own.

It’s also easy to make your own before-bed trail mix snack that science says should help you get to sleep.

Sleep-promoting food is another segment of the food industry that’s just getting started.

Nightfood Ice Cream is one of these products.

½ cup of peanuts, almonds or walnuts (salted or unsalted peanuts – your choice)

Mix all ingredients. Vary the amounts according to your taste. Store in an airtight container in the refrigerator. Eat before bedtime as a snack to stave off a middle-of-the-night hunger attack.

Some taste testers preferred a little more salt in the mix than others. They favored the addition of the salted peanuts with the walnuts, for a 50/50 mix.

For most people, the addition of a little salt from the peanuts should not affect its sleep-enhancing abilities.

Why does this trail mix concoction promote sleep? Dried tart cherries are a natural source of melatonin. Melatonin is a hormone that signals to your body that it’s time to go to bed.

Peanuts and almonds both have magnesium and are a stable source of energy. Nuts like these are higher on the glycemic index help you avoid blood sugar spikes. Walnuts also have tryptophan.

Food can play a significant role in helping you get to sleep. Keeping a batch of Dream Recovery System Bedtime Trail Mix in the refrigerator or freezer can help you stave off hunger pangs and get some good sleep every night.

Chocolate is an integral part of the trail mix. It provides a quick boost of sugar that allows a pick up when energy is flagging. The nuts then come in and give long-lasting fuel.

Unfortunately, this hurts those of us who have to pay attention to the amount of sugar we consume.

In that case, there’s nothing wrong with trying sugar-free chocolate in this mix. This kind of chocolate that’s usually made with maltitol (an alcohol) has the sweetness without the glycemic spike associated with simple sugars. The way it’s absorbed in the body decreases spikes in blood sugar.

It still has flavonoids. These compounds reduce the risk of cardiovascular disease and lower blood pressure by relaxing blood vessels.

Substitute sugar-free chocolate if sugar is a concern for you.

On nights that you don’t feel like trail mix or feel like you’d enjoy a nice bowl of cereal, try the “cereal cure.”