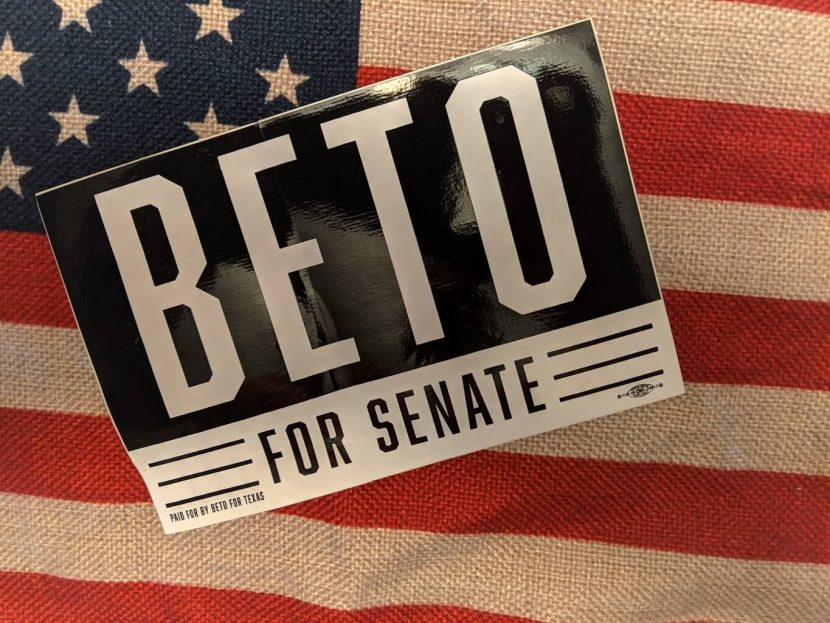 There Are 6 Important Questions You Need To Have Answered For Therapies For Sleep or Other Health Problems.

Running for Senate must be tough.

After his January 2019 loss to Sen. Ted Cruz, former Rep. Beto O’Rourke went to New Mexico later that year and ate “holy dirt.” He brought some back for his family in Texas to eat as well.

Most people haven’t run for political office. Many people have, however, interviewed for jobs they’ve wanted. They’ve repeatedly interviewed. They’ve had to return to the place or talk on the phone multiple times, over and over again.

The process can suck.

Then, to not get the job — especially when he really wanted it — the disappointment!

When it comes to running for a seat in the United States Senate, multiply the suck by at least 10.

Whatever their politics, most people can understand how the loss at the ballot box must have affected O’Rourke greatly. He very well could have had nightmares and insomnia, especially after some of those debates with Cruz.

Disappointment is part of life: yours, mine, and his. Unfortunately, life isn’t sunshine and rainbows all of the time.

I read five accounts of O’Rourke’s dirt-eating. Ridicule for politicians whom you don’t agree with is par for the course today. None of the conservative-leaning outlets reported the source of the dirt, El Santuario de Chimayo. The New Mexico church receives 300,000 visitors each year, many of whom suffer from emotional pain and various disabilities. Many have testified to its curing powers.

The site dates from 1810. Bernardo de Abeyta, a missionary priest, unearthed a crucifix on the location of the chapel. When he retrieved the crucifix, it returned to the pit he had dug on its own. The missionaries took it as a sign God wanted a church to be built on the site.

Even though church workers tell you not to eat the dirt, undoubtedly, many people besides O’Rourke do.

What has been called the “Lourdes of America” has a history going back over 200 years. It predates the Lourdes shrine in France.

Sleep problems or not, many of us search for physical, mental, or spiritual healing. Curing people of what ails them is an industry.

The New Life Expo Has Over 100 Vendors

Many exhibitors will be there offering dozens of different forms of healing in addition to UFO researchers and that kind of thing.

With over 100 exhibitors, there are many potential sources of healing or, at least, places to spend your money.

It’s like the biggest mall in the world for alternative health, and the mall is going to be running just this weekend.

When you consider all of the doctors and other practitioners scattered throughout the world, millions of people are selling one cure or another every day of the week.

When you have a health problem, how can you know which ones to consider?

As an aside, the sacred dirt must have worked for O’Rourke. His campaign raised $6.1 million from 128,000 donors in its first 24 hours. For someone who had lost a campaign for Senate, that’s quite a recovery. It’s a good sign for his political future, pundits say.

He’s got to consider himself “cured.”

Whether it’s a lost election or something else when you’re considering a cure, what should you consider?

For a start, you should know the answers to these questions.

1. What Do I Hope To Gain From Using This Thing?

Knowing where you hope to end is always a great way to start any project.

The New Life Expo has a workshop titled “Activating Your Merkaba Through Lucid Dream Control.”

Therefore, the question to answer is figuring out what you hope to gain by activating your Merkaba. The workshop should tell you, but it’s best to have a general idea before you attend. Your problem, after all, might not be solved by activating your mystical light body. If that’s not going to do anything for you, don’t bother.

Mystical light body? Do you mean soul? Honestly, this kind of language seems self-important and deceptive. You can activate your mystical light body or soul through having a lucid dream while shooting hoops or pursuing a moving meditation.

2. How Does The Thing Work?

This is important to know even when your doctor is prescribing the medicine. Have at least a general idea of what’s going on. While you might find the explanation complicated and tedious, it’s essential.

The key to understanding the explanation is to define the terms. It’s a specialized situation, so that means the language will probably be the type you don’t use or hear every day. When you have the terms defined, list them out, and draw pictures.

All scam treatments and therapies will use technical-sounding language to try to pull the wool over your eyes.

When you can explain what’s going on to a child, you understand the process fully.

That’s the level of understanding you should strive for.

The cold truth: nobody cares about the health of you and your family the way you do. Sure, your doctor and their staff care some, and some more than others, but the fact is it’s your neck on the line. Understand?

When the doctor wants to put you on a medication to reduce the LDL cholesterol and triglycerides and increase the HDL cholesterol, know what that means. Why? If you do, you’ll be more inclined to get those numbers where they should be.

Similarly, if you’re considering shungite, know how it’s supposed to work and how do you know this?

Shungite is a rock found in Russia that’s supposed to amplify meditation. It’s supposed to act as a conductor of your energy and move you toward your desired goal faster.

How? It doesn’t seem we know. That’s what they say anyway. Accept that we don’t know everything. There are still plenty of mysteries in the world. There always will be. Know as much as you can about what you’re considering.

And if you’re going to activate your Merkaba, be sure you understand precisely how and what that entails.

3. What’s the Worst That Can Happen?

Primum non nocere — First Do No Harm — is the ancient Hippocratic oath. This is the ethic and mindset that’s supposed to underscore modern medicine — though “not harm” apparently doesn’t include injury to your pocketbook in the United States.

You’ll see all kinds of people on the Internet who propose all sorts of cures, some of them which can harm or even kill you.

“Do No Harm” to yourself is an important consideration. It can be easy to overlook.

One doctor I spoke with refuses to recommend a Neti pot to patients who suffer from allergies or congestion relating to the common cold.

The Neti pot is a small pot that’s filled with an irrigant. It’s held up to the nose, and mucus is flushed out.

He believes, however, the risk is too great no matter how much relief they might provide. If the water is too hot, for example, it can burn the inside of the nose. If the water has some kind of infective microorganism, the microbe can kill. Purified water also doesn’t count for safe use. The water has to be boiled and then cooled.

The man carries the “do no harm” ethic out that far — even though he recognizes the pot can be helpful.

Bad outcomes might be rare, but they can be extreme — death.

Deadly microbes are sometimes found in soil. O’Rourke could have made himself very sick by ingesting it. Church workers at the site instruct you to place the earth next to you, not swallow it. If you want to swallow something, go to Mass and ingest the Eucharist, they’d say.

“Do no harm” is a principle you should apply to yourself when you’re trying to help yourself.

4. What Are Other Treatments That Do The Same Thing?

Healthyline.com sells the Chakra Rainbow Mat. It purports to help you achieve higher levels of enlightenment and spiritual awakening with “advanced” chakra balancing and cleansing.

It retails for $1,300 plus tax. A coupon is easily available for 20 percent off.

Whether or not your research reveals chakra balancing and cleansing would help you, it’s essential to define what you believe your problem is.

For example, say you have sore feet and you determine you have a chakra blockage at your root chakra. Now suppose that you determine your energy flow can be improved by rubbing your feet according to the alternate theory. Maybe better shoes might help.

The mat uses red jasper stones to stimulate the root chakra, the feet. Those can be purchased for around $4-10 online or in a rock shop.

You could put together a home version to positively affect all the chakras for a lot less, surely.

The sellers of the Chakra Rainbow Mat would undoubtedly argue their mat is a good value. They might even say their mat would work better than the one you made. That’s not my point. The point is you need to know what you’re buying, and you need to price around.

That goes for everything. That includes deciding between brand name versus generic drug. Conventional versus alternative medicine. Everything.

Those men and women running health companies alternative and otherwise are thinking of you as a customer. You’re better off thinking of them as a product.

And I bet you could make yourself a rainbow meditation mat for a lot less than $1,300, minus the coupon.

5. Are There Other Benefits Or Side Effects?

Consider the therapy, medication, or treatment as a package. Consider both its positives and negatives.

For example, for insomnia, Ambien (zolpidem tartrate) has side effects that include oversedation, dizziness, and hallucinations — not racism, the drug’s manufacturer famously told comedian Rosanne Barr.

Before taking anything, understand these potential side effects. Decide if they might be worth the risk.

You might consider getting outside during the day, exercise, and a regular sleep schedule might be the better way to go in trying to help your insomnia.

In addition to sleeping better, exercise has the side effects of better health, better mood, and increased strength.

Yet taking a pill is easier and faster.

You need to consider both the positives and negatives.

6. How Long Does It Take To See Results?

A lot of sellers and treatment proponents will be cagey about this answer. It puts pressure on them. It sets expectations.

Yet, it’s a fair question and needs to be included in the mix.

In O’Rourke’s case, after eating holy dirt, he got results relatively fast. His political career bounced back spectacularly.

When you push the drug adenosine when someone has supraventricular tachycardia, you can see results within 15-30 seconds when it works.

The DRS uses affiliate links in banner ads. What this means is that if you click on a link and make a purchase, we receive a portion of the sale price. This arrangement doesn’t affect our opinions.