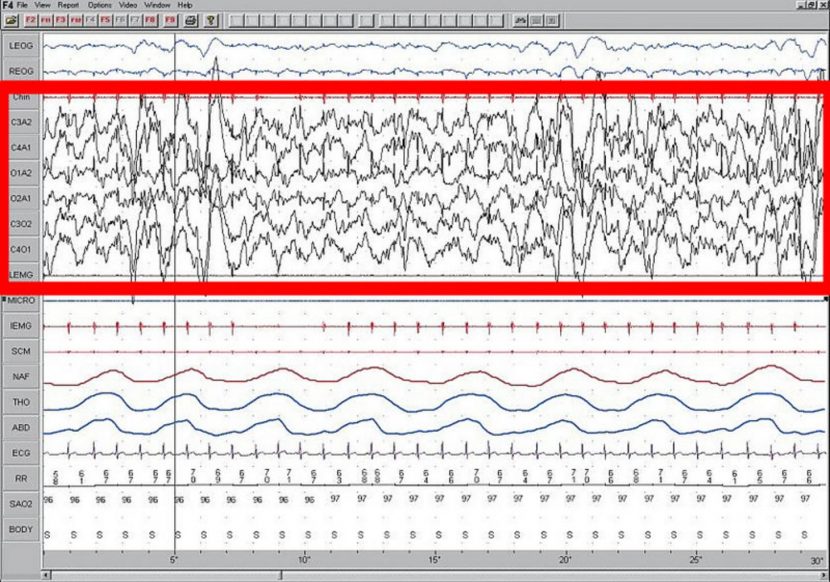 They even struggle to stop struggling, to relax.

The circadian rhythm is part of the struggle. Also known as the wake/rest cycle, men and women struggle to wake up and struggle to go to sleep. You can’t fight—or struggle well—if you don’t recharge.

At the center of these constant struggles is the brain and mind.

Electroencephalograms (EEGs) show the brain goes into different modes depending on the activity. In its different modes, the brain puts off different vibrations.  Those vibrations are illustrated above in a sample EEG printout. They vibrate in a certain way that creates a frequency.

Frequencies are measured in cycles per second. The measurement is called Hertz, abbreviated as “Hz”. There is a lot of contradictory information on the Internet about what brainwave cycle produces what effect. When we’re alert and concentrating, our brain vibrates at between 16 and 30 Hz. It’s putting off what are called “beta waves.”

Then, when we’re relaxed and heading off to sleep, the brain vibrates between 8 and 15 Hz. At that frequency, the waves are called “alpha waves.”

These states could also be called a “frame of mind.” — your outlook, mood, or attitude. That’s how you experience those frequencies. Your brain is a physical organ. Your mind resides in your brain. It’s the kind of thing people are talking about when they say things like, “The mind is willing but the flesh is weak.” Brainwave entrainment can be thought of as a way to fortify that flesh.

A lot of time we’re struggling to get into the right frame of mind. Brainwave entrainment is a way to do this without taking pills or other substances.

It’s best used in concert with other methods when attempting to reach success in an endeavor.

Don’t have your plans come down to a single point of failure.

Brainwave entrainment is accomplished through the use of binaural beats, monaural beats, and isochronic tones.

Binaural beats consist of two frequencies playing at the same time, sometimes overlaid by music or sounds of nature, through stereo headphones. These recordings are available on CDs and on smartphones. Because they’re coming through two different headphones, the human brain equalizes the frequency and produces the third beat. This third, equalized beat causes the brain to vibrate at the desired frequency. This effect aids the listener in “getting in the right frame of mind.”

Monaural beats are beats of a single frequency presented to both ears at the same time.

Isochronic tones are tones that are switched off and on rapidly to get the sought-after effect.

Biology and nature are full of examples of pacemaking — which is another word for entrainment. For example, there are collections of pacemaking cells in the heart (the SA node, the AV node, and the Purkinje fibers to name a few of the bundles). There are also the phenomena of fireflies and metronomes synchronizing when near each other. Binaural beats causing brainwave entrainment is nothing particularly odd or unique.

What brainwave entrainment tracks can do for you

Have you ever struggled with trying to get in the mood to do an assignment for school? To go to sleep? To avoid the temptation to smoke or eat one more chocolate chip cookie?

Some people have such a problem with getting into the right frame of mind that they’re diagnosed with Attention Deficit Hyperactivity Disorder (ADHD). Some people take psychiatric medications like Ritalin to treat this inability to pay attention. The drug works to impede the uptake of dopamine, a neurotransmitter, and hormone. Dopamine is a precursor to the body’s manufacturing of a variety of other compounds. It can lead to side effects like a fast heartbeat, chest pain and trouble sleeping. It’s also habit-forming. Though simple to take, drugs are a far-from-ideal solution to the problem. Owing to the cost and dependence-building nature, they should be a last resort. It makes a lot of sense to try other things first.

There are other similar drugs on the market with different mechanisms of action and, consequently, different side effects. It’s classified as a Schedule II narcotic, right in the same drug family as cocaine, morphine, and amphetamines.

For those contending with a decreased ability to concentrate, there are a variety of potential non-pharmacological solutions from prayer to the Pomodoro Technique. Brainwave entrainment is one of these solutions. It has a mixed record of success for people in studies, depending on what the individual or researcher was looking to accomplish. Roughly 70 percent of people across a group of studies reported success with it, with a portion of that group reporting a lot of success.

This is actually a number that’s quite high. If you had a drug that’s 70 percent effective with few side effects, you’d have a good chance of getting it approved by the Food and Drug Administration.

It does one well to remember one’s mind seems to play a huge part in the efficacy of anything. This is evident in a variety of observations all the way from the placebo effect, to the power of positive thinking.

What this means is a person is capable of resisting the intended effect of the tones in getting his or her brain in the intended mood. I’m not sure we’d want them to not be able to resist the impulses. That would make brainwave entrainment too much like a comic book supervillain weapon.

Some people are also incapable of being affected by brainwave entrainment due to being unable to hear the tones.

An efficacy rate that high combined with brainwave entrainment tracks being easily available through websites like YouTube, Spotify and Brainwave Love means it’s something you might want to try.

There are a variety of recordings to pursue. It’s important to match the beats to what you want to accomplish. It’s also important to find tracks you don’t find irritating. If you find it pleasant to fall asleep to the sound of falling rain and wind, maybe that’s what you want to listen to when you’re going to bed. It might take a little exploration on the users part.

It’s important to not overdo it. Listen to some tracks to get into the right frame of mind. Then plan to switch to music that complements your goal. I enjoy music too much to recommend that anyone ever go 100 percent utilitarian with what they listen to.

People do report side effects, but those are in line with what they’re wanting to accomplish, provided that they’re listening to the correct tracks or that those tracks are labeled correctly. For example, those who are listening to brainwave entrainment tracks to help them sleep can report exhaustion.

Brainwave entrainment is similar in principle to going to the gym and listening to peppy workout music. In both instances, you’re trying to accomplish something with the aid of the sounds.

It’s something you need to experiment with to see the effect on yourself. You’d also want to find a recording you can trust. You also want to use the right frequency for the effect you’re seeking to accomplish. If you’re trying to go to sleep, you definitely don’t want to be listening to tracks that encourage focus. That’s another reason to only listen to tracks produced by reputable sources — haphazard listening is a waste of your time and effort.

Pick the right brain entrainment frequency for your goal

There are tracks available for many purposes. They basically follow along these lines.

Be sure to use the general principles of learning by experience to help you get the most you can out of brainwave entrainment.

What brainwave entrainment can’t do

People posit brainwaves at a certain frequency to be able to attract money, love, and everything else people want. This is because the brain plays a role in obtaining these things through positive thinking, personality, and belief.

Whether someone can make a track works for these things is questionable. There’s absolutely no reason to think that they’d be effective for that. You’d have to have a sample of people in a lab and check them as they attracted love to them, for example. It’s much easier to study what happens when someone studies or sleeps, for example. It’s not fair to judge the effectiveness of brainwave entrainment by looking at its success at getting you in a relationship or at making you a millionaire.

By now it should be clear that the effect is not some form of magic or brain control. It’s better to think of it as a gentle nudge in a direction you want to go. If you want to go to sleep, and it’s time for you to go to sleep, you can think of restful thoughts, put your earbuds in, select a track that’s heavy on alpha, theta, and delta beats and rest. Be sure to stay away from beta and gamma beats. You might drift off.

You’ll also have to experiment with your equipment. For example, the earphones that came with your smartphone might be uncomfortable to wear if you’re a side sleeper. It puts a lot of pressure on your ear when you’re turned on your side. One way to adjust to this is to sleep with one of your ears hanging off of the pillow. Another is to sleep with your arm under your head.

That doesn’t work well if you want to adjust during the night.

Another thing to keep in mind is that since brainwave entrainment operates by getting your brain reverberating at a certain frequency that once you set up the vibration, the vibration will continue for an indefinite amount of time. There’s not necessarily a need to listen to the tracks for seven or eight straight hours.

Yet, at the same time, there is no way to check to see if your brain is reverberating at the correct frequency. You’re stuck with guessing whether it is or not. As a pathway to a particular goal, brainwave entrainment leaves a lot to be desired.

If you decide to try it anyway, soft earphones would make for more comfortable listening for sleep.

The general-purpose headphones also might not be able to handle the low frequencies. In personal testing, they seemed to work for me, though they were only rated to 20 Hz, which would place them solidly in the gamma wave range. As with much on the Internet, that bit of information seemed bent on selling something.

As an alternative to brainwave entrainment tones, some people enjoy sleeping sounds. These are relaxing sounds that put people in a restful mood: falling rain, waves, crickets, crackling fires. The right soundtrack can make for a mental vacation.

Fifty years ago many people fell asleep to the sound of their AM radio.

Get to those goals! How to sleep less and stay healthy.

Banner ads on the DRS contain affiliate links. If you click on the ad and make a purchase, the DRS receives a commission. Our opinions are unaffected.