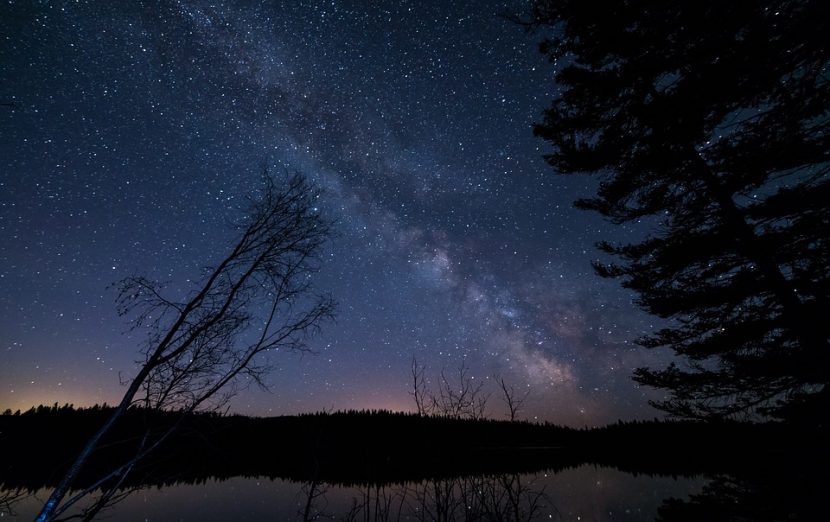 We didn’t start out this way. We weren’t meant to live amid all this light pollution.

It’s progress in some ways, an irreplaceable loss in others.

There’s no going back.

Our ancestors didn’t have streetlights, neon signs, porch lights, and motion-detecting lights every hour of the day. Light at night has been easy to come by since Thomas Edison. Add it up and that extra light outside is known as light pollution. When you hear “light pollution” realize it’s a whole different problem from blue light. By many measures, light pollution is increasing.

Many have never experienced the darkness of a new-moon night for themselves, though more are. Camping has been rising in popularity in recent years, according to the 2019 North American Camping Report. Bivvy bags (bivvy is a derivation on bivouac, a term for military camping) makes tentless camping more pleasurable.

Darkness in or near a large city isn’t all that dark. Only when you’re in the middle of nowhere do you understand how what you saw before wasn’t that dark. In the hinterlands on a night with a new moon, it’s so dark you can’t see your hand when you hold it up a foot from the front of your face.

That’s the kind of darkness our forefathers experienced regularly. When the sun went down, they had mostly darkness with the occasional lantern, campfire, or torch to shed some light where they needed it. There were no motion lights, searchlights, street lights, and all of the other sources of light pollution.

Head out to the country to taste what our ancestors experienced daily. If you live in the United States, head to the west, especially to the rural areas of west Texas where the skies are bigger and darker than any other place in the United States. If that’s not practical, take a look at this map. There are a lot of places that are fairly light pollution-free when you get out of the city. Tucson, Arizona is one big city that’s taken measures to cut down on its light pollution due to its proximity to an observatory.

Spend a night or two outside. Getting a bivvy bag makes it easier to do this outside without a tent. If it’s too cold where you live right now, plan to do it next year after it warms up. Our ancestors would have done this many nights out of the year when they were traveling between towns, hunting, whaling, building, tending livestock or doing an innumerable list of other things.

Their lives were very different from ours, but we should at least be familiar with the way things were so we can understand why people made the decisions they did that brought us to this point in time.

Sometimes it’s hard for us to understand our history. The world has changed in many ways. Light pollution is just one of them.

Spending a few nights outside sleeping under the stars with or without a bivvy bag is one way of staying in touch with what it was like to be human.

The temperature dips at night in many places. Stay warm. Wear appropriate clothing. Be comfortable. Have the right equipment. You’re outside, so remember you’re vulnerable to the weather so be prepared. According to most people, the best season for sleeping outside is the summer, even with the insects. Other good seasons are spring and fall. The cold can be energizing, however, so this is a matter of personal taste.

2. A clear sky is better than a cloudy sky

When you’re checking the weather forecast, pay special attention to the amount of cloud cover they’re predicting. Whether it’s going to be a new moon, a full moon or some kind of moon in between doesn’t matter as much as cloud cover. The stars are beautiful. They’re what you’re missing on most nights you sleep inside under a roof in the city.

Find a place to sleep outside with a dark sky and no light pollution. Being out at sea is great for this. Inland, many campgrounds in the western United States away from the bigger cities have dark skies. Light pollution is everywhere but some places have less than others. Less light pollution means you’ll be able to see and appreciate more of the Earth in its natural magnificence.

If you can, pick a night with a new moon. There will be fewer competing sources of illumination. Pick an area without much traffic. Lights from cars passing by will affect your ability to see at night. It’s also more pleasant.

Your eye pupils dilate in the dark. The more light in the background, the more your pupils are affected.

Picking a place to spread out your bivvy bag is like picking a place to pitch a tent. To get away from light pollution and appreciate the magnificence of the night, you want to find an area without many trees around.

Mountain and hilltops can be great for this.

Be aware that when shopping for a bivvy bag, that the word has many different spellings: bivvi, bivi, bivvie sac among them.

If you’ve never had the kind of experiences that prepare you for sleeping outside, check out this article with some tips on how to enjoy camping.

Before you go too far away from the city, a practice run in an area near home makes sense.

5. Know something about the night sky

Having taken an astronomy lab helps heighten enjoyment, as does coming out to the country with a star map or star app. Looking at a smartphone affects your night vision, so you’ll be better off if you use a flashlight with a red lens and a star map.

Knowing a few stories from antiquity about the constellations helps too.

6. Be grateful for your night away from light pollution.

If you get to go tentless camping regularly, count yourself very blessed. Being grateful for the pleasurable experiences in life heightens their enjoyment.

Do you think it’s important to get away from light pollution and spend a night under the Milky Way? Comment below.

5 thoughts on “Lose the Light Pollution! 6 Ways To Add Enjoyment To the Night Sky”