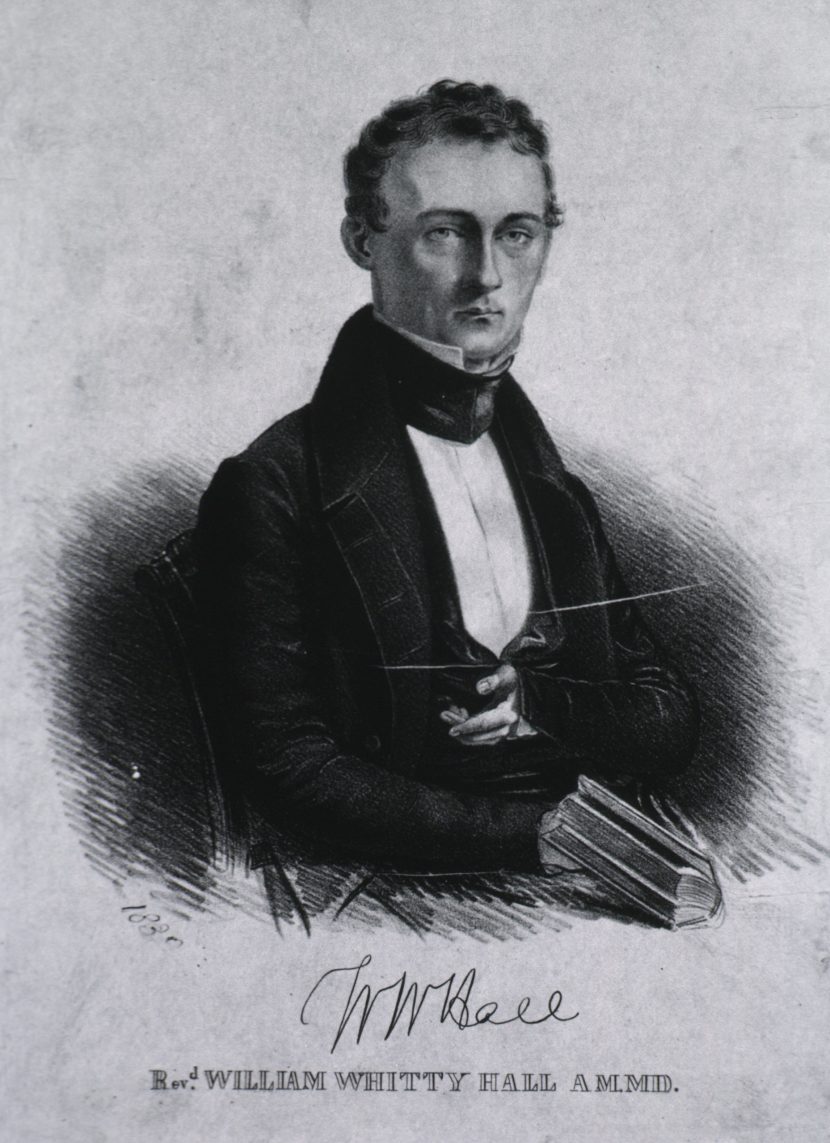 In our day, probably the greatest obstacle to getting a refreshing and recharging night of sleep is non-stop activity. Both we and our electronic devices are always on. Smartphones and computers interfere with our ability to fall asleep with their beeps, notifications, and addicting design. Their addictive lure beckons when we should be asleep.

Sleep problems, however, are nothing new.

Back in 1870, the world was completely different. There were no computers, no smartphones, and no caffeinated energy drinks. The coffee was different too. “Coffee” was often made out of different, inferior things other than coffee beans. The chances of getting a good cup of coffee have improved in the last 20 years, so that’s different too.

In that year, Sleep, Or, the Hygiene Of the Night was written by Hall and published by the Dawson Brothers. It’s a book that steeped in its period.

Hall made a strong case as to why people shouldn’t sleep together.

The case he made was so strong, so convincing, that married couples weren’t depicted in movies and on TV shows as sleeping together until the 1970s, a hundred years later.

Dr. Hall was both a medical doctor and minister from Kentucky who started practicing medicine in New York when he was 41. He soon founded Hall’s Journal of Health, an influential publication that was later absorbed by Popular Science. He also wrote many books targeted toward other doctors, primarily centering around diseases of the respiratory tract.

A modern-day equivalent to Hall might be TV’s Dr. Oz. Hall’s magazine featured a lot of short articles on how to live longer and more healthfully, kind of like Dr. Oz’s television show. Both men are influential physicians. Just as Dr. Oz often does, Dr. Hall sometimes strayed from the orthodox views of the medical establishment.

In reading his articles and books, it’s apparent Dr. Hall was a man with a mission. That mission would include encouraging others to live a healthy lifestyle as he saw it. He didn’t apply his sage advice to himself, however. According to the Dictionary of American Biography, he regularly violated his advice to others to work in moderation, working from 5 a.m. to 10 p.m. every day.

Sleep is one of those influential books in its time that isn’t often read today. In it, Hall detailed the problems with sleeping together.

“This is the great physical evil of sleeping together: the air in the room is rapidly contaminated by two sleepers in any ordinary room. This contamination begins to lay the foundation for disease. That result is inevitable in the very nature of things.”

Sometimes this is contradicted by cracks in doors and rooms of different dimensions. However, if two people slept in the same room together, they were eventually going to make each other sick.

“(You see) all kinds of degradation from people living too closely together.”

In Sleep, Hall went on to prove this theory by anecdote and experiment, over and over again. Indoor air pumped through a filter made of distilled water resulted in the distilled water becoming loaded with particles. He showed how the well-to-do lived longer than the poor “who have to huddle together.”

He lamented what poorly ventilated buildings were doing to America’s physical constitution.

“What our fathers did with their stalwart frames and iron constitutions, and simple, temperate and regular modes of life, we attempt at our peril, with our easy gourmandizing, pampered ways, our furnace-heated apartments, and our dwellings three rooms deep, with chambers guiltless of a window.”

Better housing would better a lot of people, he wrote.

Sleep was a wide-ranging manifesto about the importance of doing certain actions to allow yourself the best rest possible. It took what we might call a public health perspective on the matter. The country wasn’t as developed in 1870 as it is today.

This was a cutting-edge observation. Between 1880 and 1900, 21 disease-causing organisms were identified.

Squalor makes people stupid, he said, citing a study that showed that 80% of low-intelligence children lived with one or more parents who were drunks. Such children were often begotten in debauchery, he wrote.

While modern studies, might have somewhat different results, the link between poor fetal development and alcoholism is well established, at least for mothers.

He also advocated for not allowing children who aren’t related to sleep together “even if they come from a good family.”

In 1889, the water heater was invented. No matter. Hall advocated for regular bathing in cold water. The process can be completed in five minutes, two in the winter, he wrote.

Food should be plain and nourishing. “Dinner should be cold, stale bread, and nothing more.” This was to lessen the chance anyone would pass gas at night.

He advised people not to drink water with meals either. The thinking was, that the water would lessen the ability of the body to digest food.

Despite these asides, Sleep focused on the problem of poorly ventilated buildings.

Hall wrote that this was especially important for men. They have to be healthy to provide for their families. “That’s the first social duty.”

“The wife’s sleep is important too, but if it’s interrupted, she can take it in the daytime. If it’s broken up too much, however, mental instability and depression result,” he wrote.

Sleep was also crucial for the healthy development of children, too.

It’s fair to say Hall was pro-sleep for the entire family. He noted profits of at least 10 percent on the outlay could be had by building dwellings with adequate ventilation and would be willing to speak to any builder or capitalist who would back such buildings.

One of the more interesting passages concerns a “Dr. Kraft” who allegedly discovered a race of people from Africa who were unknown before 1859 or 1860. These people don’t know what disease or sickness are. According to this Dr. Kraft, these people didn’t live in houses or tents.

Checking out who this Dr. Kraft might be, and to verify this story, I found there was a famous German missionary named John Ludwig Krapf. He explored and recorded many details of east Africa, including the coastline.

Kraft and Krapf sound similar. Krapf wrote a lot. None of his writing seems to support the actual existence of such people.

It seems that in Sleep, the doctor was referring to a race of people who didn’t exist. To support the story, the tellers applied the name of the missionary.

Could this be an example of . . . salesmanship? It’s reminiscent to a tall tale akin to stories of Paul Bunyan and Babe the Blue Ox. Some details were exaggerated, some outright lies.

To the south of Kafka and Suss, there is a very sultry and humid country, with many bamboo woods, inhabited by a race called the Dodos, who are no bigger than boys of 10 years old; that is, only four feet high. They have a dark, olive-colored complexion, and live in a completely savage state, like the beasts.

The Dodo have no temples, but they do have a god called Yer. When they get nervous they pray with their feet elevated on a tree or stone and their head on the ground.

They have no chiefs, laws, or weapons. They don’t hunt. They don’t plant crops. They live on fruits, roots, mice, serpents, ants, and honey. Both sexes go around completely naked.

They have thick lips that stick out, flat noses, and small eyes. Their fingernails grow out, and they use them to claw the earth so they can eat ants and tear apart snakes for food.

Dodo eat their snakes raw, too, because they don’t know how to use fire.

They multiply rapidly, too, even though they don’t have marriages. When they have sexual intercourse, the children go to whatever home.

They’re easy for slave hunters to catch. All they have to do is hold up brightly colored clothes. Since they’re so healthy, so docile and obedient, they’re never sold beyond a certain area in Africa.

If the Dodo existed, they’d be a people who one might not feel bad about enslaving. This is interesting because Sleep is non-fiction. Many other claims can be fact-checked. Nothing denotes this as a fantasy.

What’s further interesting is that Hall is a fact-based writer. Moreover, he was a fact-based writer with a considerable amount of goodwill for his fellow man, focused as he was on stopping the transmission of disease. That he was taken in by the story of the Dodo seems incredulous.

He had never been to Africa. There were limits to what any man knows. When he wrote of the Dodo, he went on the word of others.

For example, the claim was once made that ethanol takes more energy to produce than it creates. This claim was based on questionable data inputs.

Author Upton Sinclar once wrote, “It’s difficult to get a man to understand something when his salary depends on him not understanding it.”

That’s precisely what you probably have there.

Until the 13th Amendment abolished slavery in the United States in 1865, slaves were very valuable, representing about $100,000 in income per slave in 1850 as measured in modern dollars.

The institution was troubling, yet fabricated stories like this undoubtedly had an impact on generations. Born of salesmanship, they formed the basis for belief until they were contradicted by reality.

While Sleep isn’t a valid source of information for our modern world, it is of interest to those who are fascinated as to where we have been as a society. It had an impact on society, probably mostly for the better. Further, it gives credence to Mark Twain’s proposition that while history doesn’t necessarily repeat itself, it certainly rhymes.

It also reminds us that while salesmanship and debate can be good, lying isn’t.

The biggest takeaway is how reliant we are on others for our opinions. We, therefore, have to work to be as balanced as we can in our views. When we quote others, we need to get accurate quotes and not rely on hearsay. There is logic to Hall’s opinions when it comes to sleep and health. It departs from that when it gets out of the realm of personal experience.

His work leaves an interesting legacy.