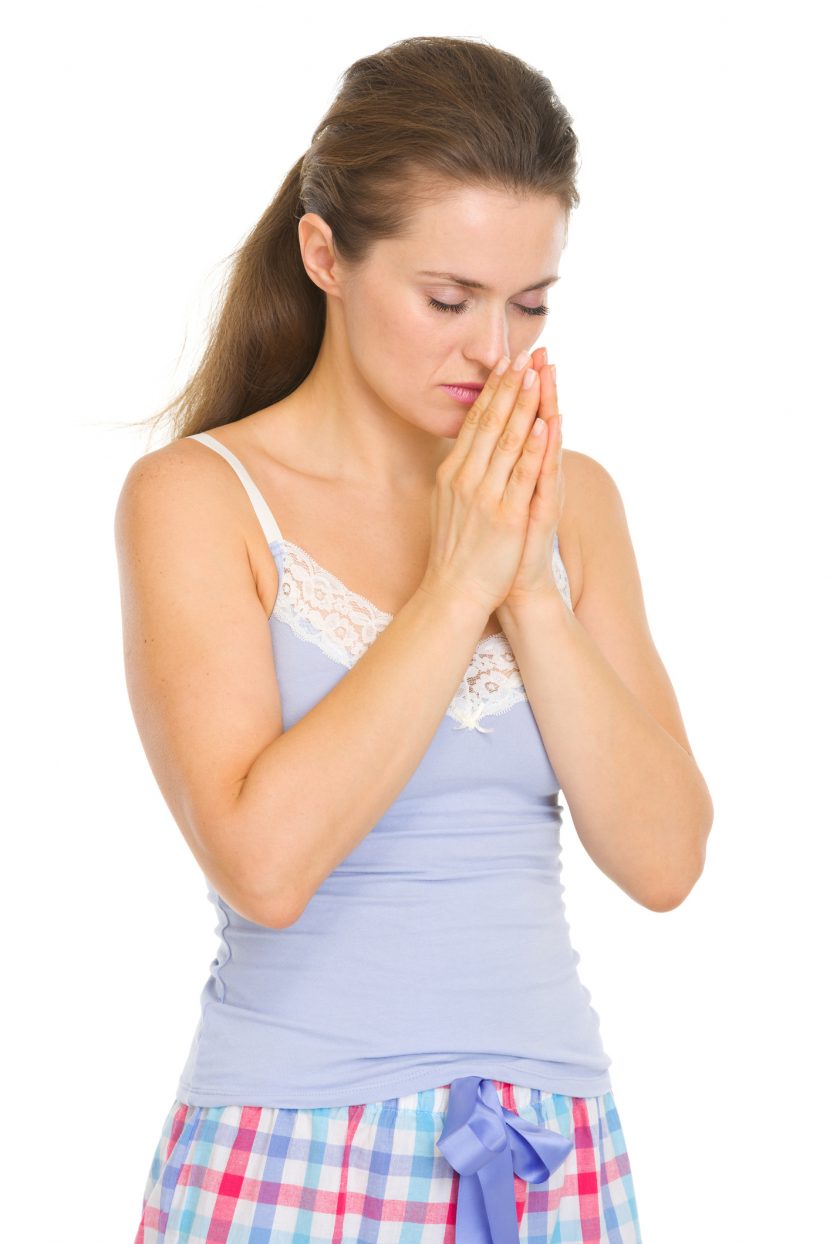 When going to bed, people brush their teeth. They put on some loose, comfortable clothing. They tighten their bedsheets.

It’s all part of a routine in getting ready to go to bed. Rituals like these routines help one get in the mindset for sleep success.

It’s pretty common. Talking to God at bedtime is part of a restful tradition that has been going on for thousands of years. It’s hard to tell precisely which culture and place was the first to do it.

As the old saying goes, “There are no atheists in foxholes.” Praying before bed must seem natural to many people, just like praying before you go into battle. The sleeper is making themselves vulnerable by lying down. Nobody wants to be vulnerable because when you’re weak, you’re not secure. Still, everyone has to sleep.

Throughout time people have had to sleep in a wide variety of situations. They’ve gone to sleep while others have hunted them. They’ve been exhausted when their life is under threat. They’ve drifted off while being bombed or under siege.

They’ve known or heard of others who have died in their sleep. They think (if only in the back of their mind) death at night could happen to them too.

Then there have been times when they’ve had to go to sleep on the best day of their life. They don’t want to go to sleep then. They’d rather the day continue.

Yet to not sleep is not an option. This sets a person up for a quandary.

Yet saying prayers before bed can be a valuable ritual, part of the acceptance process for the need for sleep, part of seeking security from enemies natural and supernatural. It’s the perfect time to turn over the joys and sorrows and the fears and fascinations to a higher power. The bedtime prayer process promotes a relaxed, easy mindset which promotes sleep.

Some people are taught prayers as a child. Often, they continue with those.

Others make up their own about the issues they face in their life.

Having particular words you say is useful only so far as you’re not taxed with having to come up with what to say. Having a memorized set of words can “grease the groove” to borrow an expression from physical exercise. It can get you started.

Sometimes it’s not the memorized words of a prayer, but rather a format.

Bedtime prayer gets some of the weight off of your mind. If you’re trying to go to sleep cursing your bad luck or thinking about how one thing or another in your life could be better, you’re naturally going to have a hard time getting to sleep than someone who’s reflecting on all of the things that are going right.

Reflecting on what’s going right is another way of saying “counting your blessings.”

The ideal bedtime prayer is simple, memorable, and restful. It can be a short or long prayer. It should inspire a feeling of security and predispose you toward looking at the big picture. The big picture is critical to keep in mind because every day of your life is full of a bunch of ups and downs, even if everything in your life is trending upward.

There are plenty of ways of doing this.

A favorite traditional bedtime prayer for many Catholics and Christians in English is this one:

In Spanish, the most popular bedtime prayer is a prayer asking for assistance from their guardian angel in keeping them safe while they sleep.

The English translation is . . .

Guardian angel
Sweet Companion
Don’t forsake me
Neither night nor day
Don’t leave me alone or
I’d miss you.

A bedtime prayer in Italian also includes a petition to one’s guardian angel. The English translation is as follows:

Beautiful, beautiful little angel,
come and stay always by my side,
make me as good as you,
and then take me to Jesus.

Some people use the prayer known as the Lord’s Prayer (or the ‘Our Father’) as a bedtime prayer.

Our Father,
Who art in heaven.
Hallowed be thy name.
Thy kingdom come,
Thy will be done.
On Earth, as it is in Heaven.
Give us this day
Our daily bread
And forgive us our trespasses
As we forgive those
Who trespass against
And lead us not into temptation
But deliver us from evil. Amen.

Bedtime Prayers In Other Religious Traditions

Many traditions have a variation of the Lord’s Prayer translated into their respective language.

The Jewish faith has several, but here’s one that meets our guidelines of simple, memorable, and restful.

Adonai is one of the familiar names of God. Jews consider it disrespectful to use a proper name. It’s the equivalent of saying, “Lord.”

In the name of Adonai, the God of Israel:
May the angel Michael be at my right,
and the angel Gabriel be at my left;
and in front of me, the angel Uriel,
and behind me, the angel Raphael…
and above my head, the Sh’khinah (Divine Presence).

Whatever you send yourself off to bed with, it’s better if it’s not something you have to read off of a sheet of paper. If you have it memorized, it’s internalized.

Going to bed is universal. Every faith tradition seems to have bedtime prayers. On the Internet, one can find a prayer for Muslims or a prayer penned by Martin Luther.

What they all have in common is the promotion of a secure mindset that leads to relaxation. Many of them express hope of one thing or another, whether it’s heaven, forgiveness, prosperity, overcoming challenges, or protection.

They are adaptable to whatever circumstances you might find yourself trying to go to sleep in.

As technology advances, so do prayer aids for believers.

Depending on their faith, Great-Grandma may have only had a collection of prayer cards and rosary to reflect with. Great-Grandpa was limited to reading and reflecting on the Psalms at bedtime. Modern-day believers, on the other hand, have other bedtime prayer tools at their disposal.

Sleep-oriented bedtime prayer apps include Abide, Hallow, and Soultime. What the believer finds to be most effective seems to be a matter of individual preference. One may like to read the Bible on their phone. Someone who has read the Bible a couple of times might gravitate toward reading faith-inspired e-books like the Left Behind series, C.S. Lewis, or electronic issues of Guideposts magazine.

Someone who feels intimidated by reading the Bible can tackle it with one of several Bible-in-a-year programs available.

And the links above merely lead to Catholic and Christian-based prayer websites. There are certainly others targeted toward non-Christian believers.

Conversely, you may abandon all tech aids at bedtime and adopt your great-grandparent’s methods.

If some app intrigues you, try it for a week or so. That gives you a chance to learn how to use it and see if you like its change.

Everyone goes through periods of doubt at one time or another. Some people feel foolish about praying. On top of that, certain people don’t represent the official positions of their faiths very well. They fall far short of the ideals of their faith. It’s easy for someone standing on the outside to think, “there’s no way I want to be any part of that.”

Even though everyone doesn’t always feel free, they have free will, if in no other way but to control their feelings. It’s crucial to separate humankind’s corruptible nature from humanity’s Creator. Humankind wouldn’t matter very much if we were a bunch of robots that had to do the bidding of a higher power.

One way of getting the benefits of bedtime prayer while struggling with belief in a higher power is to “act as if.” Based on the work of psychologist William James, another way of describing the practice is to “fake it until you make it.” For example, if you’re not happy and act as if you are, your mood can change. If you’re not feeling confident and act as if you are, you can begin to feel confident. Act as if. It’s hard for the body to maintain a paradox.

Remember, there are plenty of physical paradoxes in the universe. It’s entirely rational to think there “could be” a God. It’s okay to struggle with doubt. Any worthwhile God can take your doubt. Don’t let doubt keep you from taking advantage of the benefits of bedtime prayer.

How do you put yourself into a positive mindset for sleeping? Comment below.

How To Use A Prayer Candle

The banner ads contain affiliate links. This means that if you click the ad and make a purchase, the DRS receives a part of the transaction. All opinions remain our own.