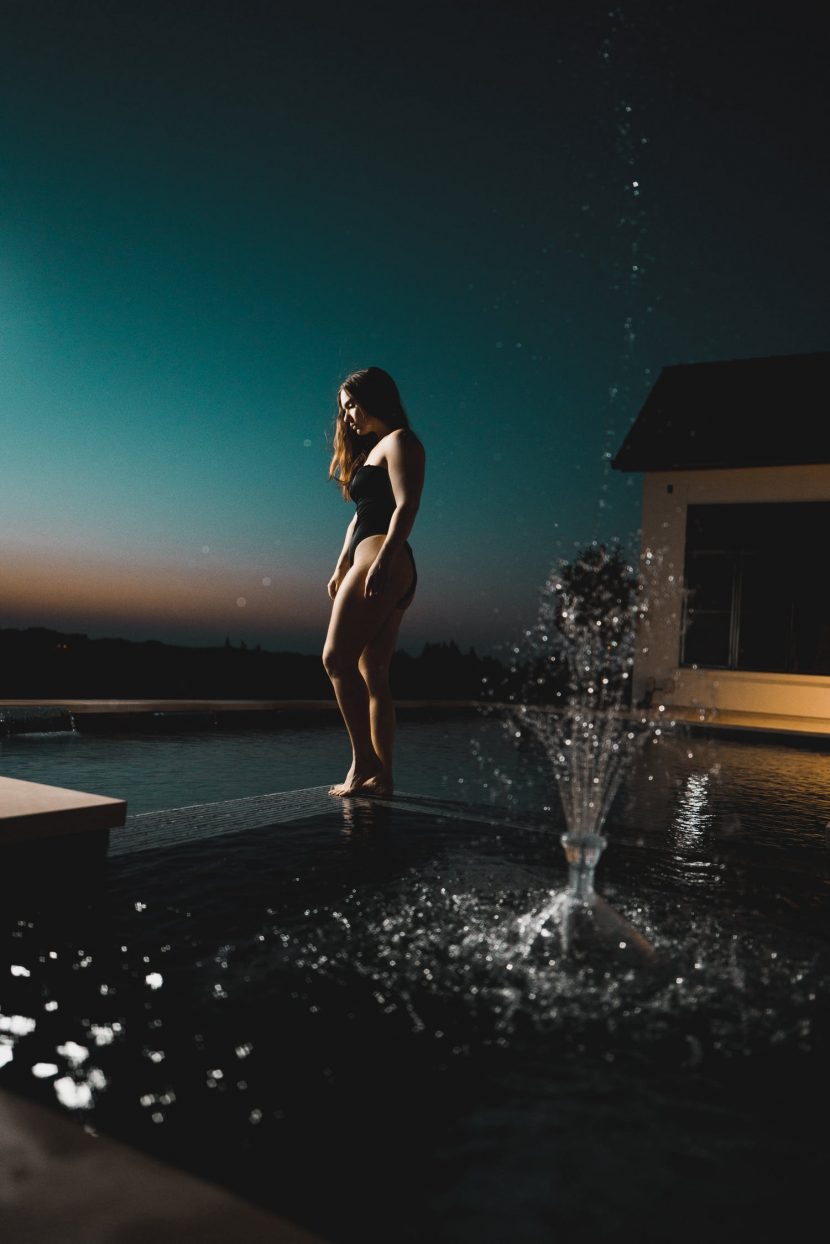 Saying that may or may not inspire an image in the listener’s mind of someone who slept well. Practically every parent has had the experience of trying to soothe a colicky baby all night at least once.

However, babies sometimes sleep through all kinds of things. It’s a mixed metaphor.

There you go. Logs are heavy but float. They don’t move, except for the floating, perhaps drifting away to Dreamland. That’s some heavy, hard-core sleeping!

The image of the log and water is restful.

Isn’t the image of exercise is the opposite? With exercise, one is active, jumping around, moving heavy objects. Do they conflict? Are they opposites? Can swimming for sleep be a thing? Should you swim at night before bed? If you do swim, should you do nothing more than float?

Exercising right before bed has a bad name.

In general, exercise increases your metabolism and raises your heart rate. This can affect your ability to drop off to sleep quickly and get a good night’s sleep.

According to the National Sleep Foundation, however, exercise at any time of the day is better for sleep than no exercise. Johns Hopkins Medicine counsels one needs to be mindful of how exercise can affect their sleep.

To some, exercise before bed may be taboo. It shouldn’t be.

Swimming, because the water holds down your body temperature through with heat transference to the surrounding water, perhaps, is even better for sleep than other forms of exercise.

Swimming cools you off. You’re cooler after swimming as compared to other forms of exercise that don’t involve water and heat transference. This may lead to being better able to sleep as compared with different types of exercise.

At night, you miss the UV radiation that causes tanning, skin cancer, wrinkling, and the expense of sunscreen. Those factors alone help to make the night the best time of the day to swim.

Many people associate swimming with being a kid. Many learn to swim as a child and don’t swim much as an adult. Kids swim more than adults. Kids also play. Adults need to play too.

Swimming is more than swimming laps

There’s a particular aspect to fitness where people want to look good doing it.

People spend a lot of money on fitness fashion. They use weights and spend money on gyms when an at-home workout is cheaper and more accessible. There’s a social aspect to it.

At a public park in Tempe, Arizona, in the United States that I’ve frequented over the years, I can’t think of a time when I’ve seen people practicing tai chi by themselves. It’s always with a group of three or more. Nobody seems to want to do tai chi in the park by themselves.

Perhaps people feel or think they’d look weird doing them alone in public. They should remember at least some of the moves and transitions. When you consider tai chi videos, they’re often shot with one instructor performing the moves by themselves in a beautiful place like a beach or among the red rocks of Sedona. Now the park in Tempe could hardly be put in that classification for natural beauty, but, either way, the instructors don’t look weird.

When considering exercising in a swimming pool, there’s that impulse too. However, most people don’t think beyond swimming laps or water aerobics class.

Swimming at night should further decrease that taboo. Few are around. Few will see you. Be as silly and stupid as you want alone or with close friends. Do more of what you want to do. That freedom helps tilt it even more toward being the best time of the day to swim.

A study of 24 middle-aged women found a 60-minute program of swimming, three times per week reduced their blood fat levels and increased their physical strength. Physical strength, as defined in the study, should be differentiated from muscular strength. The researchers define physical strength as the strength related to “maintaining life and actively defending external stimulation.” It’s a mix of muscular strength, muscular endurance, flexibility, and cardiovascular endurance that are directly related to health, such as sports injury and chronic illness.

Other health writers have referred to this as “functional fitness.”

Why night swimming before bed is great

In summer, in much of the southwestern United States, the temperature soars during the summer. Phoenix and Las Vegas, for example, regularly faces temperatures over 110 during July and August. Jumping into a swimming pool feels terrific.

If you swim in the afternoon, it can cool you off for hours. Doing this, however, can be an activity that sticks out in your day like a sore thumb. It interferes. First, you have to put on your swimsuit. Then you get into the pool and swim around for a predetermined amount of time. Then you get out, shower off, and then, maybe make and eat dinner and then undertake all of the usual nighttime rituals.

You might find the transition among other activities easier if you put it at the very end of the day.

After dinner, you’d wait a bit of time for your food to digest, putting on your suit. Then, get in the water. Exercise. Get out. Shower off, dry yourself, and go to bed.

What to do to get swimming exercise

If you have your own pool or access to another pool, grab a friend. It’s better to swim in pairs because it’s safer and safer is better. If something happens, the other person can drag you out of the water and save your life.

Try turning the lights down. Swimming under the starlight or moonlight is a primordial pleasure. It’s a way of underscoring to your mind that it’s night, and you’re going to head off to bed soon. Swimming at night can be part of your routine.

Put some music that you enjoy on. This is an opportunity to listen to music. Music makes life better. If you float around the pool, however, you’ll hear very little of it.

Unless you are the kind of a person who completely locks up when it’s time to move, you don’t need a swim class leader to show you how to proceed. Simply move. Walk around the pool. Hang on the side, and kick your legs. Do any exercise that you’d to on land (or try to). Tai chi. Dance. It can be that simple. There are some other links below for additional ideas.

If you enjoy doing exercises in the pool and find you want to do them over the long term, you can acquire equipment that helps you to do it. Otherwise, it’s not necessary.

Perhaps swimming isn’t the one panacea to getting exercise or good sleep at night. During the winter it’s too cold for many people. Those people may want to find something else. However, it can be one of the answers for many, and there’s nothing wrong with that.

How a lack of sleep affects reaction times in sport.

Special exercises before sleep can lower your blood pressure.

The solution to snoring can be a certain exercise.