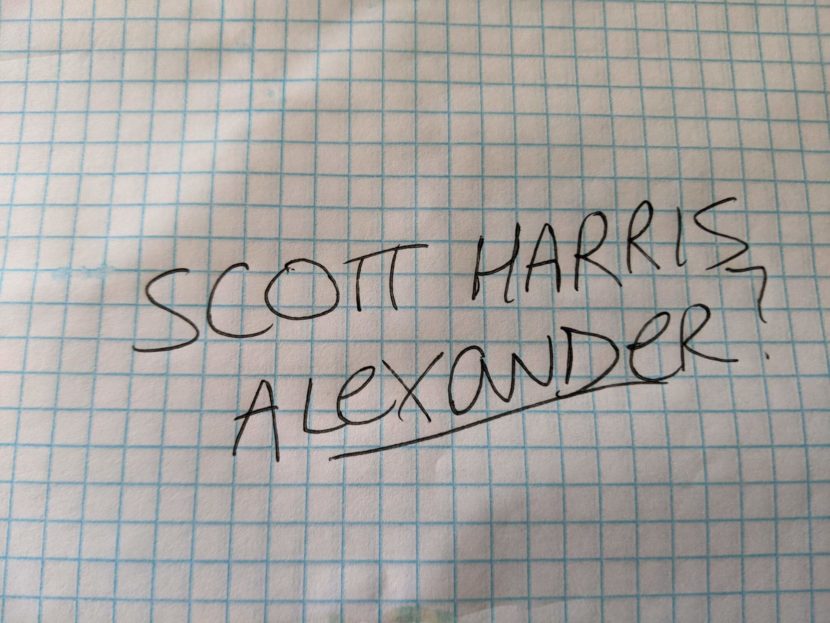 Scott Harris Alexander was one of the men who burst into the room in the middle of my dream.

Who is Scott Harris Alexander?

The name must have meant something to me﹘my subconscious supplied the name﹘but when it was time to interpret the dream I had no idea what.

Sometimes it’s easy to understand what the name means.

For example, once, when I was taking a tough class, in a dream I reached for a bottle of Classpirin to take away my pain.

That’s a playful smashup of “class” and “aspirin” the time-honored headache painkiller.

Anyone who keeps a dream journal will occasionally encounter names they don’t immediately understand.

This is to be distinguished from dreaming about a particular person either one you know or don’t know. For example, once, after watching a German documentary, my subconscious once used Stevie Nicks to make a point how Roma people could benefit from trying to evoke more glamour.

Rather than her name representing anything in particular, my subconscious was referencing Stevie’s career, specifically her hit song “Gypsy.”

1.  Type the unknown name into a search engine.

As a person alive in the Internet age, this may be the first thing that occurs to you. It’s not completely useless. I had a suggestion from my spirit guide to understand and consider the life of St. Philip Neri as a way to tell me to lighten up. While I had heard of St. Philip Neri (several churches are named after him) before then, I actually knew nothing about him. So yes, something you’ll get information you don’t know in a dream and your favorite search engine can help you understand why it’s there.

2. Try asking yourself what the name represents.

If you encounter a man named “Tom Green” maybe the symbolism is within the name itself. For example, the color “green” may represent something to you in the context it’s presented to you in the dream by your subconscious.

3. Does the name belong to someone you’ve forgotten about from your past?

Is that it? Now, do you remember? No? For most of us, the guy who sat in front of us in the first grade isn’t at the top of our conscious mind. The subconscious is another story. The next step is to understand why you’re thinking about them now.

Did you meet Hector Spectre? Jilly Hilly? Is your subconscious having some fun wordplay in putting across its concepts? Can you uncover the meaning behind the rhyme?

Why is that? Why isn’t your subconscious presenting the name clearly? Could it be that the name itself isn’t important? Or was it you who’s just not remembering it well? Is the slurring for a reason in itself?

You can easily spend the rest of your day wondering about what was trying to be communicated.

If you can’t figure it out, it might be time to ask for a clarifying dream from your subconscious.

6. Is it a nonsense name that’s supposed to represent a name in a foreign language you don’t understand?

Only with some fluency does it start to make sense when you dream in a foreign language.

7. Are you really remembering the name right?

It’s worth asking yourself this again. You may be or you may not be. Only you can understand if you’re sure.

If you meet someone named Nowtfa Tuoteg in your dream and she shows you a good time, there could be a reason your subconscious named the woman that. Spelled backward, Nowtfa Tuoteg is Get Out Af Town. That, dear reader, is close enough to Get Out Of Town. Your subconscious might be telling you that it’s time to move or, maybe, take a day trip. You’re the best judge of what the message is. Don’t forget, too, that’s there’s a reason Nowtfa Tuoteg is a woman.

9. Look at how the name is being applied.

Scott Harris Alexander was the name of the person in the middle of the group of men who were bursting into the room. The others went nameless. I thought it was odd my subconscious was being so specific about the name. Three names: a first, middle, and last.

Paying attention to the placement of the names and the way it’s applied in the dream can give you important clues.

10. Break the name apart and examine the different components.

When you’ve looked at these other ways to understand the meaning of the name, try this.

I considered what each of these names meant to me individually. I realized that these names all belonged to men who represented protectors to me, individually. They were from different backgrounds, different states, different ethnicities. Yet they all have a protective streak. The men bursting in the room in the dream were all involved in protection.

In the end, it became clear that the dream had nothing at all to do with Alexander Scott Harris, a talented professional photographer from Brooklyn, New York.

You may be tempted to assign some kind of psychic explanation to the name you’ve dreamed up. That kind of thing does happen, but it’s more common that there’s another underlying meaning.

The Dream Recovery System uses affiliate links. What this means is that if you click on an ad and make a purchase we may receive a small commission from the sale. This does not influence our opinions.