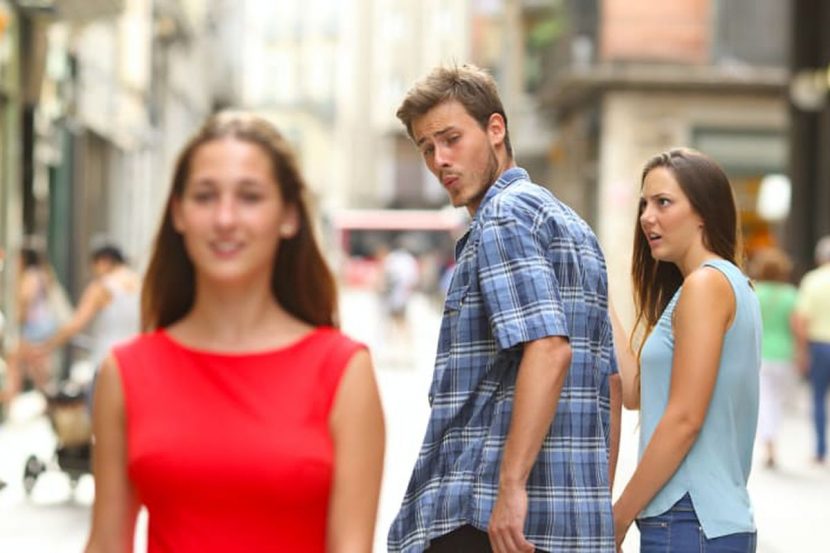 That’s another way of saying letting yourself be distracted.

Both sleep and distraction have had a bad name for years.

The photo above has become a famous meme about distraction.

The guy is with one girl and can’t help but be distracted by another. Both females are roughly equal in attractiveness and appear to be equal as far as a picture. Yet he can’t help himself. Because of this, the ignored girlfriend is disgusted.

Broadly speaking, for men and women, distraction is a fact of life. Willpower is limited. We’re not willing to accept it, however. If we were, we’d be willing to work with distraction and actually use it in a way that benefits us.

Part of the reason we’re not willing to work with our inherent tendency to become distracted is that there has been a smear campaign against distraction for years.

Distraction, so they say, is bad. You should calmly accept you’re going to be distracted. You should be mindful of your body and your surroundings.

Notice your breathing. Air goes into your lungs. Air goes out of your lungs. Notice the feeling of the floor as you sit with your legs crossed.

Even these trivial details?

So goes the instruction for mindfulness meditation.

Examples of the bias against distraction are replete in a variety of beliefs.

Further, the power of concentration and mindfulness gets hyped. Sherlock Holmes, Hercule Poirot, Batman, and other fictional detectives are held up as exemplars of detective work for their observation powers. You can’t make observations if you’re not paying attention. Conversely, obtuse (distracted) characters are portrayed as idiots, bumblers, unkind, and, generally, never anything good.

It’s often equated to moral weakness. The guy in the meme above is depicted to be a cheater.

How to be more mindful, how to pay attention becomes the goal of our society. There are an average of 110,000 searches a month for “mindfulness.” Few for distraction, unless it’s to define the word.

Mindfulness is a goal.

So, too, should sometimes distraction be a goal. It’s not necessarily a bane. Sometimes it’s beneficial.

You need to sleep. Distracting yourself from a racing mind is the first step in falling asleep.

However, the market for “distraction medication” is much bigger. That would include every drink and other substances one imbibes to have a good time.

Simply allowing yourself to be distracted could result in one using less alcohol and mind-altering substances. One wouldn’t need the excuse of the substance.

You get overdrawn. You receive notices for insufficient funds. When you run your debit card at a business, it may get declined.

Willpower can also be compared to a muscle because the will is part of what makes muscles work. Like other muscles, after a while, it gives out. Even a strongman is going to weaken at some point.

If you’re doing physical labor, you need to pace the use of your muscles. You need to rest periodically. If you’re on the clock, you (and your employer) probably feel as if you need to work smarter, not harder. To use a physical labor example, if you’re moving boxes, you might want to use tools like a hand truck (also known as a dolly) to move four or five boxes at a time.

At some point, working hard, you’ll get sore and be unable to do any more.

If you went at the job in a lackadaisical, easy way, you’d complete it sooner or later. Your muscles wouldn’t get tired. It might not happen timely, but that might be okay.

Maybe you’d use some general guidelines to stack the boxes safely without giving the process too much thought.

Maybe you’d set a timer, telling yourself that you’d work on stacking boxes for no more than 10 minutes every day.

Maybe you’d look at moving the boxes as more of an opportunity to listen to your favorite music or podcast.

Distracted work might become a form of low-intensity work.

And that’s what we’re really talking about here—low intensity versus high-intensity work. What we need to understand is when can you use the low-intensity version.

It’s like making chili in a crockpot versus another pot. You can use higher temperatures and concentrated effort, or you can pour cans of this and a bunch of cut-up meat and cook for low temperatures for hours, expending practically no effort.

Contrary to the campaign against it, there’s a certain power in distraction in the right place and in the right way. Just as with the crockpot chili, compared to the chili you paid concentrated attention to, it can give you better results in the end.

You can say the same thing about yoga as well.

There’s a physical component to it too, but a lot of the benefits are similar to safe distraction.

Just as gazing off into the distance doesn’t burn very many calories, neither does tai chi. You’ll see it listed as a form of martial art, yet you couldn’t use the moves to defend yourself. There is no striking an opponent. There is no blocking an opponent’s blow.

There is, however, “releasing the old, stale qi” and “gathering new, fresh qi.”

Chi is the life force.

Saying that it’s a form of distraction isn’t meant to discredit or impugn it. Tai chi has been proven to have health benefits like strength and flexibility.

When you perform your qi gong or tai chi moves, you’re not doing the report for which there’s a looming deadline. You’re not concentrating. You’re performing a moving meditation. It’s not much different than what you’d be doing, shooting baskets by yourself and letting your mind wander.

Harness the power of distraction

If you harness the power of distraction to stay in shape and you zone out around traffic, it could have tragic consequences for you. You could get hit by a car.

If you harness the power of distraction and work in your yard, say pruning trees, you could end up with some ridiculous-looking trees, maybe even kill them.

Raking leaves, however, you’re safe. Rake away and let your mind wander.

A major concern when actively trying to employ distraction for good is physical safety. With safety, you have the best chance of avoiding all the bad consequences and experience only good ones.

Another concern is to use a trigger to pull yourself out of the distracting activity. If you’re always looking at the clock, you’re not distracted enough. For example, it could be a mile-long walk you’re taking. When you get to the end of the mile, you turn around and come back.

It could be a podcast you’re listening to. When you get to the end of the 45-minute podcast, you’re done.

If you’re mowing a lawn, when you’ve mowed it all, you’re done.

The other thing that’s important to realize is that not every environment is possible to be distracted. Heavily urban areas, areas with other people around all the time, noisy areas, any place where conditions are liable to change quickly aren’t appropriate for distraction.

Other places are tough to get distracted in. For example, places that are too hot or too cold. Places that would provide too much of a physical challenge to you. Places where your phone is going off frequently with notifications.

Safety when being distracted makes one place more desirable to live in than another. Other factors go into desirability, to be sure, but it is a consideration.

Any activity can be distracting in a good way. It can be a game, listening to music, a problem you’re trying to solve, or any challenge. What matters is whether it occupies your mind crowding out any other concern.

That, and providing yourself some “hook” so that you can come back to reality when you’re done with your escapism. Getting distracted doesn’t necessarily mean getting carried away so that you forget what you need to do.

Why would one worry about whether their work was low-intensity enough?

When it’s low key enough, the work becomes a form of rest.

Sometimes distraction can help you accomplish a goal that sits in the background. Maybe you have physical or emotional pain. Can you work on something else, getting your mind off of what’s bothering you? Sometimes the pain is the body’s way of saying, “don’t do that.” Other times it’s as if the body is stuck in a cycle, a rut.

The power of distraction is best at addressing those minor, nagging pains—the kind of pains that can suck all of the fun out of life.

If you can let yourself get mentally carried away, you can get a break from the pain.

Allowing yourself to be distracted can put you in the creative zone where mental breakthroughs are possible. Psychologists have characterized these as “flow” and “peak experiences.” Flow are short-lived, rewarding experiences. The transformational peak experiences contrast them. Both of these types of experiences allow you to reach what psychologist Abraham Maslow called self-actualization.

Being too mindful of the events of the day-to-day grind can prevent you from seeing the bigger picture.

If you’re trying to become a professional athlete, set world’s records, or beat others in competition, distracted movement isn’t for you. On the other hand, simply moving can help you lose weight and stay in shape. For this more-humble goal, distracted movement is appropriate and even desirable as long as it can be done without risk of injury or other untoward effects. Distracted movement can be on land. It can also be in a pool. It can also be before bed. By disengaging your brain, you may be doing your body a service by allowing it to spend longer on an activity than it would naturally otherwise do.

Some people feel like they have to work hard and play hard. It’s as if they don’t know how to shift gears to allow themselves a chance to relax and slow down.

Distraction can provide you with that restorative mental vacation you need.

If you can master the power of distraction you might find that it becomes a powerful ally.

1 thought on “The Hidden Power Of Distraction”